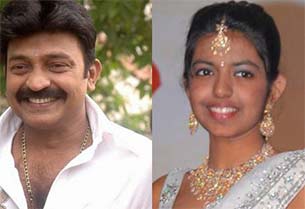 Shivani, daughter of popular Telugu actor Rajasekhar, will make her cinematic debut in upcoming movie "Vanda Ki Vanda". Rajasekhar says he couldn't have asked for a better debut for his daughter.

Shivani is the daughter of Rajasekhar and his wife Jeevitha.

"We've been waiting for a good project to launch her. We are glad this project came our way. 'Vanda Ki Vanda' is an interesting film and I feel it would be a great debut for Shivani. She plays a very important role in it," Rajasekhar told IANS, without divulging any more details about her role.

"This project will go on floors after I complete shooting for 'Gaddam Gang'. We don't want to hurry as it's an important project," added the actor, who himself has an important role in "Vanda Ki Vanda".