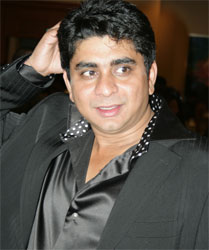 While blogging may not be an entirely new trend in Bollywood, Rajan Shahi is the first director and producer from the Indian Television Industry who seems to have caught the blogging bug. With his shows Sapna Baabul Ka 'Bidaai' and Yeh Rishta Kya Kehlata Hai topping the TRP charts, it looks like Rajan Shahi is all set to build a closer connection with his audiences!

The ace Director and Producer says, "The concept of my blog is a personal diary and I have named it 'Yours Truly, Rajan Shahi'.  I will be writing regularly in order to connect to audiences worldwide on a variety of topics.  From sharing my day to day happenings and some behind the scene secrets to expressing my opinion on certain topics, and also sharing some of my future plans, my blog will be my voice reaching out to those who are interested in me and my shows!"

While Rajan Shahi claims that he is not very tech savvy, he still does catch up on viewer opinions online, which is what led him to start his own blog on India-Forums. Planning to share insights of his journey as well as his interactions with those in the industry so far, Rajan Shahi tells us that his blog will be launching on Friday, April 10!

It looks like Yours Truly Rajan Shahi will surely create a stir in the Indian television industry..

devashreeable 10 years ago sir, i am a fan of urs.......and also bidaai....dont wind it up early......come out with a another rocking serial with apoorva and parul as leads...

snehalvkapote 11 years ago dear rajan ji
in 1998 i had visited ur office when u and ravi rai use to work together.kala madam was also there

Ye she is truly Rajan Shahi

SecretKhabri420 11 years ago Welcome to IF blogging Rajan Shahi :-)

shruti 11 years ago Awesome!! The members can interact with Mr.Rajan Shahi & put forward their thoughts/views on his projects!!

jiya25 11 years ago Wellcome Rajan Ji...we are looking forward to sharing our views and getting to know you better.....

sonam_s 11 years ago Awesome! He should allow the Bidaai and Yeh Rishta team to write something about him.