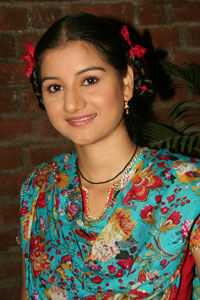 STAR Plus, ’s leading General Entertainment Channel is set to give its viewers a daily dose of spice and heartiness with a simple girl’s tale of big dreams ‘Raja Ki Ayeegi Baraat’, starting Monday, 21 January at 8 p.m. This weekday serial will air every Monday to Thursday. It’s the first time ever that STAR Plus has taken the initiative to showcase huge palatial sets, vintage cars, horse races… thus creating a complete royal setting and offering the viewers a visual treat. Sunrise Telefilms will mark its first production venture with the primetime offering ‘Raja Ki Ayeegi Baraat’.

Intending to create an interesting mix of programming for the weekday prime time band, this will be STAR Plus’s attempt to showcase a never before shown fiction drama on the lines of the ever popular fairytale ‘Cinderella’. ‘Raja Ki Ayeegi Baraat’ is a story of Rani, a young girl from the village whose only dream is to make her family proud and happy. She is an innocent, shy and a very simple girl. Rani is very good in her studies and always tops in her class. Her mother has been the breadwinner of the family after Rani’s father passes away. Rani has a younger brother and a dadi who are very loving and dote on her.

Like every other girl her age, Rani has hopes, dreams and aspirations of her prince charming taking her away from her uninteresting, drab and routine life to give her the worlds best of material riches and plenty of love. However, Rani’s fate has something else in store for her..Will she be able to win the heart of her prince? And, will she be accepted as the ‘Bahu’ of the Royal Family in which she works as a servant?

Says Anupama Mandloi, Senior Creative Director, “Raja Ki Ayeegi Baraat will add to STAR Plus’ innovative programming mix, which is packed with 100% entertainment for all ages –- in short, it’s a complete entertainer for the entire family. We, at STAR Plus, always look to introduce more variety and depth in the content offering to our viewers. Taking this endeavour forward, this January, we have first introduced the celebrity reality game show Kaho Na Yaar Hai and now with Raja Ki Ayeegi Baraat hope to give an interesting, unique, and distinctive story that is a class apart among the current range of television programmes.”

To watch out for a story which will make you smile, cry & live your fantasies stay tuned to the new show ‘Raja Ki Ayeegi Baraat’ starting Mon-Thurs, Jan 21st, 8 p.m. only on STAR PLUS!!

+ 2
14 years ago One more rich guy-poor girl, the maid and the master kind of theme. Why can't production houses come up with innovative storylines instead of recycling the same old themes.

+ 2
14 years ago i wod luv 2 see it..but i hope it doesnt crash down like hello dollie inspired from princess diaries or antariksh from ramayana and doesnt get stopped abtruptly..all d best..

rdmt319 14 years ago cinderella isn't british. it might be greek (according to wikipedia).

+ 3
14 years ago i think you guys should be more positive about.

i think this show wunt be that bad, looking forward to it :)

+ 2
14 years ago gosh..this will be soo boring.
THINK OF NEW IDEAS!
and shes not that pretty :S

14 years ago boring......bring something new
stop feeding us the same crap

14 years ago seems like a book for me...I mean it in a good way tho...best of luck for the team

14 years ago I am happy for Star Plus and the indian viewers but Cinderella was the british idea... I used to watch it when I was a kid and now the same thing over again. This even happened in a episode of Saat Phere. I am not being rude guys just my opinion. Well I am happy for it all.. and good luck with it.