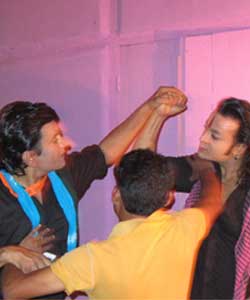 Raja Chaudhari who is presently seen on Sahara One's Kahani Chandrakanta Ki has always been in the limelight for the wrong reasons. The latest is his major fight with the lead actor of the show, Santosh Shukla, who plays the character of Virendra Singh.

When contacted Santosh about the incident, he immediately stated, "Raja always has some or the other problem on the set and yes, there was always a cold war between us. The situation got worse the other day when I was doing my make up and had to step out to attend an urgent call. I came back and found Raja sitting and doing his makeup. As my scene was before his, I told him to get ready later but he exploded on me and consequently the argument turned physical."

BB 14: Vikas & Eijaz get into a brawl over latter's allegations

Aayush Sharma's Huge Transformation in Antim to startle everyone: ...

+ 3
9 years ago Well this is d only way he thinks he can be in News. I hope Media stops giving him free ka publicity for these fights

+ 4
9 years ago As far as I knew, he was tadipar ie not allowed to enter Bombay... How come he is acting in a serial??

+ 2
9 years ago Good for him...atleast by dis he comes in media notice...LOL lol

dream1z 9 years ago well! Raja is problematic person! Stay away from him

DancingRani 9 years ago Raja.. Jagro Ka Raja.. Vah Vah ! LOL nothing new for Raja.. everyone should like avoid working with him..

9 years ago The man is completely mad. Its time he is locked up in a lunatic asylum.

9 years ago lol that pic is hilarious ROFL seriously