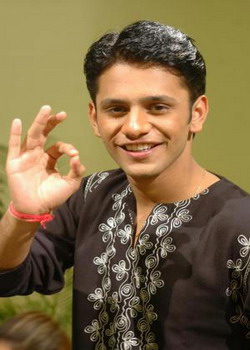 Will Champions retain their title or will the challengers win over the champions? Who will become the first superstar of the nation? These were the question in the minds of all the viewers of Star Plus' Jo Jeeta Wohi Superstar. Though 18 contestants participated in the contest along with two other wild card entrants, Abhijeet Sawant, Harshit Saxena and Rahul Vaidya made it to the finals of this musical reality show. And after that breathe taking moment, finally Rahul Vaidya walked away with the title of the Superstar. The audience chose Abhijeet Sawant to be the first runner up, while Harshit Saxena became the second runner up.

The finale was a grand affair with many stars gracing the occasion. From Sonu Nigam, Bipasha Basu to Shahid Kapoor and Vidya Balan all of them were present to encourage the finalists. If bollywood made their efforts, the tellywood actors were not far behind. The team of Baa Bahoo Baby, Bidaai and Kumkum was present on sets to support their own favorites and even the finalists made sure not to disappoint any of the celebrities as they gave one after another flawless performances. Along with the finalists, even the already eliminated contestants rocked the stage with their performances. Sonu Nigam and the finalists of Star voice of India, Chhote Ustaad gave their own share of entertainment on the final episode leaving the audience to glue to their TV sets.

Rahul Vaidya, the winner bagged 2, 16,693 votes, Abhijeet Sawant, already a champion and winner of Indian Idol, fell a little short of votes and got 2,02,321 votes, while Harshit Saxena, the second runners up managed to collect 1,56,291 votes.


The proud winner was presented with a rockstar jacket and a check for fifty lakh Rupees. Shahid, Vidya and the judges of this show, Farah Khan, Vishal and Shekhar presented Rahul with the winner’s trophy while Abhijeet and Harshit received their runners up trophy. The Tellybuzz team congratulates the winner and the whole team of Jo Jeeta wohi superstar for putting up such a great show enjoyable by all the viewers.

14 years ago finally a well deserving candidate won in any reality show!!!!!!

+ 2
14 years ago I'm soooooooo hapy for Rahul & even moreso coz Juhi & Husein came to support him & he won!!lots & lots of congrats Rahul, you totally deserve it!!!