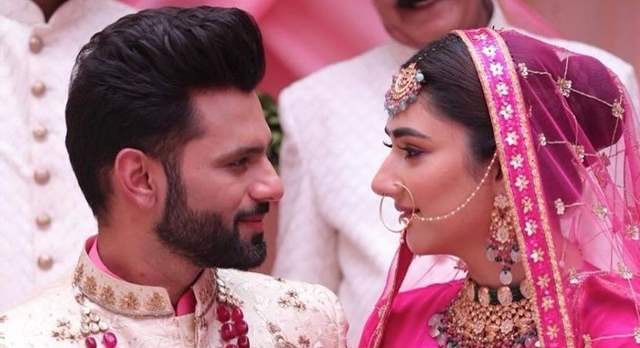 India Forums is here with some good news for the fans Rahul Vaidya and Disha Parmar.

Ever since the couple made their relationship official on the biggest reality show Bigg Boss 14, speculations were rife about their wedding plans. The singer recently revealed that the duo had to postpone their wedding due to pandemic. Rahul had said that he would want his close friends and relatives to attend his big day but because of pandemic he couldn’t invite everyone and hence he and Disha decided to postpone their big day.

Well, now it looks like the couple is set to walk the aisle. Rahul announced that he will tie the knot with actress Disha Parmar on July 16th 2021. Have a look at his post:

Rahul and Disha knew each other for a couple of years. There were rumours about their affair but they always denied them. Rahul proposed to Disha on National Television on her birthday last year and ever since then, they’re painting the town red with their love. Disha made an appearance on Bigg Boss 14 valentine’s day special and accepted Rahul’s proposal. Rahul’s mother visited him in the family week special and revealed that they had started the wedding preps.

After a lot of speculations, finally Rahul and Disha have officially announced about their wedding date. Rahul appeared in the first season of Indian Idol but he gained immense popularity with his stint in Bigg Boss 14. He will also be seen in Colors’ upcoming reality show ‘Khatron Ke Khiladi 11’. Disha made her acting debut with Star Plus’ ‘Pyaar Ka Dard Hai Meetha Meetha Pyaara Pyaara’. She was also seen in Zee TV show ‘Woh Apna Sa’.

India Forums would like to extend our heartfelt congratulations to the couple.

2 months ago Congrats to de couple…they look cute together 🥰🥰