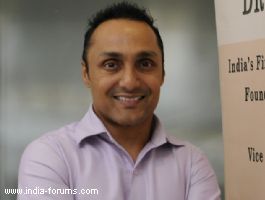 The actor did not mention the title of the film that he is shooting for. Just last month, he was battling the heat in Kolkata for a shoot.