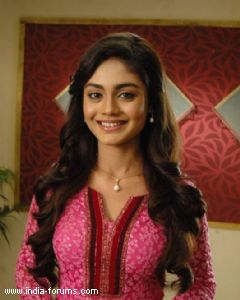 Sreejita De more famously known as Mukta in the ongoing Colors' show, Uttaran shared that how the team is working towards bringing up the TRPs of the show so that its gets a lifeline.

Sreejita is unaware about the show Uttaran going off air and refutes to talk about the same, "Well, I don't know as we have not heard from the channel or the production house. Thus I really can't comment on the same," she says.

So is it because the show has seen a downfall in acquiring the numbers and has failed to garner the attention of the viewers? Sreejita avers, "Yes, it could be the reason. This show has been running on Television since 5 years and in such case, it is bound that show will go through few ups and downs but the whole team is working towards this. People do get tired of watching the same emotional drama thus our team is working towards bringing some fresh elements which will keep the audience glued to our show. We are working to boost the TRPs of the show."

Sreejit says that the upcoming track of the show will focus on the reunion of two sisters and this will bring a drama in the show, "As per the ongoing track Vishnu (Ajay Chaudhary) has been thrown out of the job whereas Meethi (Tina Dutta) is doing well in her field. I'll come to know that Vishnu has taken a low class job. I am very disappointed to know out about Vishnu's job. But later will come to know about the circumstances which leads him to accept this job. Basically it's a reunion of two sisters that will bring a new drama in the show."

Well, only time will decide the fate of Uttaran. Till then keep reading this space for more such updates!

-Maryam.K- 6 years ago Its time to finish of this show!! And even if this show still continues for 10 years, it will still not have any TRP's.

And to the below comment all I would say is *awks*

purvi_tvstarlet 6 years ago mrunal jain is so hot and sexy . i wish i could be his wife .

tinafans 6 years ago Tina Dutta quit this uttaran ...U have much bettr future than this..God bless u darling

saurabhrocks 6 years ago Tb don't confuse meethi's hubby akash played by mrunal
mukta's hubby vishnu
the role is played by ajay
while mukta is succeful at her career vishnu is not.
Sreejita get rid of bakwas show and pair