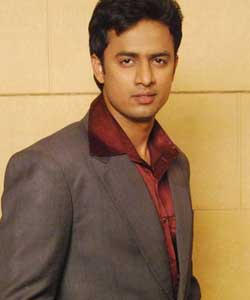 Actor Sandit Tiwari who essays the character of Sagar in Big Magic's popular show Mahisagar is a dedicated and a responsible person. The actor, who does his work with full dedication, also understands his responsibility as a citizen of India and the actor is going to his hometown just to cast his vote.

TellyBuzz spoke to Sandit to know more about his plans for voting and his views about being a responsible citizen of the nation and importance of voting.

Sandit says, "I will be going to my hometown Raipur (Chattisgarh) on 24th just to cast my vote. The good thing is that the voting is going to take place the same day in Mumbai so we will be getting an off that day but it was all pre decided by me that I have to go to my hometown anyhow to vote. I had booked my tickets earlier only. I will be going there on 23rd night and will come back to Mumbai on 24th night. Last time I couldn't vote because I was doing my MBA and couldn't go to my hometown because of my studies but this time I was quite determined about it."

He further added, "We all say that we must vote so we must actually vote and prove ourselves as a responsible citizen of the nation. Everybody should vote. Election dates were announced much before so we must plan accordingly so that we shouldn't miss out voting. Even the actors who belong to Mumbai should go and vote and even if they are from outside Mumbai, they should try their best to go their hometown and vote. Every vote counts and we must utilize this opportunity to choose the right government so that we shouldn't get an opportunity to complain about anything further."

That's very patriotic of you Sandit!

BB 14: Shocking mid-week eviction with vote from connections to take ...