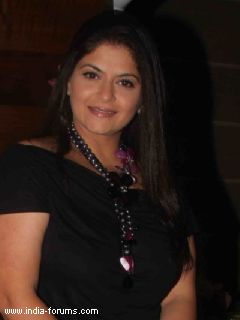 Pragati has also shot for a cameo for Shashi Sumeet Productions' recently launched show Tumhari Paakhi, for which she has already finished shooting.

After Shilpa Shinde has made her exit from the show due to a fracture in her arm, Pragati will be taking the journey of Daya Maai forward and she has already started shooting for it from yesterday.

TellyBuzz spoke to the talented actress to know more about her entry as Daya Maai in the show.

Pragati told TellyBuzz, "I have started shooting for the show a day before. The character of Daya Maai is very strong. Shilpa is a very good actor and she has added certain dimension to the character. I will try to maintain that and will try my best to go beyond that and not less than that. The writing team and the creative team have worked very hard from day one to bring up this character."

When asked Pragati about working with the team, she added, "The co-actors are very chilled out and the production team is also fantastic to work with."

"Do watch the show Do Dil Ek Jaan and keep giving your feedback about the new Daya Maai. If you don't like her then keep loving her so that you will like her at the end of the day," concludes Pragati giving a message to the fans.

7 years ago Welcome Pragati Mam toDo DIl EK Jaan we all are looking forward to your acting. All the best

7 years ago Welcome Pragati Mehra on the show! Do Dil Ek Jaan rocks!

7 years ago WELCOME PRAGATI MEHRA TO DO DIL EK JAAN