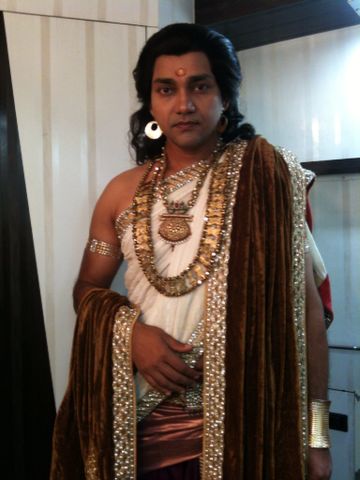 Talented actor Rishi Khurana, who was last seen in Zee TV's Badalte Rishton Ki Daastan, will be soon seen as Nahush in Nikhil Sinha's popular mythological series Devon Ke Dev. Mahadev on Life OK. The actor is quite excited to  play this role.

TellyBuzz spoke to Rishi to know more about his character, costumes, preparations and much more.

Sounding excited about playing Nahush in the show, Rishi tells us, "It's a very interesting character as Nahush is Mahadev's son in law. Initially he will be positive but it would be interesting to see how things turn and then he will be shown as negative. So, I have lots of scope to perform. I am quite excited about entering the show and playing this character. It's going to be a very unique and a difficult experience as well."

When it comes to acting, Rishi says that he acts with simplicity but Nahush's character is little loud and has been a tough experience for him, "I am a natural actor and here everything is so loud and I have to wear lots of jewellery and a heavy costume. Acting so loud is very difficult for me. So, it's little difficult experience for me."

When asked about the preparations done by Rishi for playing this character, he added, "I belong to the theatre and have a Hindi background so it's not a big deal for me to play this character. Being a theater actor, I have a good command over Hindi language and now I have got a chance to speak pure Hindi with this show. I am quite confident that I can do it. Initially, I thought that I might not be able to do it and I was little uncomfortable on the first day of my shoot. The production people and everyone here are good to work with."

We wish you all the very best Rishi!

silvermoonlight 6 years ago i was a little creeped out when I saw him playing Nahush mainly cause his wife looks like a little girl!! I think they should have shown a slightly matured girl with him as he does look in his 30's.

Nothing against the actor has he does act well and will suit the role..Just weirded out by the pairing.

Thanks TB for wonderful news

So after 1 year we can see Ashok Sundari again

And again Nahush is also replaced...!!

foram. 6 years ago he is a great actor, looking forward to this track but he looks so old for ashoksundari

a theatre actor.. then i an expect a feast of expressions.. even though this track is brought in frm nowhere, it seems interesting tht hw the story will unfold