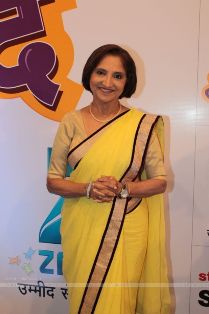 We have seen her many times playing the elderly Baa but now for the first time she will be seen as a colorful Nani. Playing a lively character in the newly launched Bh Se Bhade on Zee Tv, Sarita Joshi despite being in her early seventies is raring to go and enjoy every moment of life.

Talking about what made her choose the role of a Nani she says, "It was the producers J D Majethia and Aatish Kapadia who own Hats Off Productions which has a good background. They have been with me for so many years and we have worked for so many years for TV and theater. We go back a long way and they are like family for me. Every person has his or her nature and they know my nature and they take good care of me. Also at this age I look at doing quality not quantity work. Even if the role is less I don't mind since I don't work for money."

The actress who is known to be punctual tells us more about her attachment to the producers and says, "JD and Aatish have become big people now but they never make me realize that they have become big producers. Even there families love me and that they understand my nature is the biggest thing. Now I have become choosy, I want little rest too, the work should be dignified, and my nature is that of a cleanliness freak. I want cleanliness should be maintained since I spend more time working than at home. I am on the sets sometimes for 12 hours and more so that is a necessity which they take care of completely."

In the show we see Sarita in an avatar which is very different from the rest. Playing mother-in-law to Bhade she wears a normal saree with her hair cut short and has a love hate relationship with Bhade (played by Deven Bhojani). "The role itself is very different. I would say it is zara hatke as compared to what the viewers have seen me since I have done more of serious roles on Indian Television even though I have done many variations in Gujrati theatre. In this show people have liked my get-up too since it is different. I had suggested the easy to maintain hairstyle as it helps me get ready fast. I have to do make up because it is needed otherwise I would do without it too." 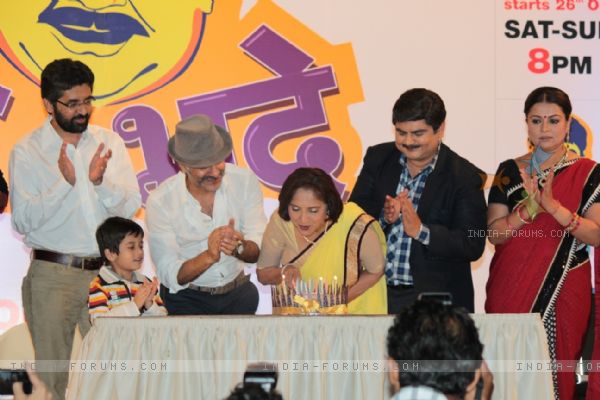 While in the show, they are shown having a sweet and sour relationship, in reality she shares a good rapport with Deven, "In fact with Deven I have played many different characters. While we were acting as mother and son in Baa, Bahu aur Baby we were doing a play where we were paired opposite each other" says the talented veteran actress.

She completed one more graceful year and her birthday cake was cut at the launch of the show with the producers, cast and media too being present. Talking excitedly about it she says, "I felt good during the cake cutting. I felt like a small child and at the same my daughter Ketki's son called me telling me about my birthday plans. It was a good gesture by JD and Aatish. They both were so small and I have seen them from the start. Then there are so many others too like Dilip Joshi whom I have directed too earlier."

While she has received many awards the latest has been the Best actress award from Washington DC for her latest film release Gangoobai. Is she inclined to do more films? "I have done a Saurabh Shukla film, it is a small role and it should release soon and if I can manage to adjust dates with my new show then why not, I am open to doing more films."