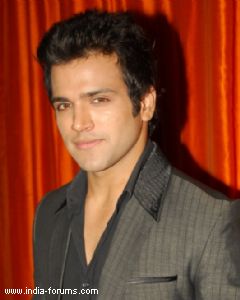 Rithvik Dhanjani who rose to fame by playing Jay Khurana in Star One's popular show Pyaar Kii Ye Ek Kahaani and now who is currently seen as Arjun in Zee TV's Pavitra Rishta is a great dancer and after showing his dancing skills in Jhalak Dikhhla Jaa 5 - Dancing with the stars, he is winning audiences heart by grooving on the dance floor of Nach Baliye Season 6 with his baliye Asha Negi.

They are known as one of the most adorable couple on the show who have always given enthralling performances every week.

TellyBuzz spoke to Rithvik to know more about his experience being a part of the show and many more.

Here is Rithvik sharing the details about the same...

How has been your journey in Nach Baliye?

What was your motive to take part in the show?

My motive to take part in the show was only Asha. When I did Jhalak, it helped me so much in a way that now people have started knowing me as a person and not just by my character. I felt that Asha needed recognition at this particular point of time. She wouldn't want to do Jhalak because she was scared to dance all alone but she was very much confident of dancing with me because she knew that I will take care of all the things. So, we decided to take part in Nach Baliye and now people know her as Asha; people are not calling her Purvi anymore. She is very famous by her character name but people hardly know Asha in real. So, just to let people know what Asha is in her real life, we participated in Nach Baliye and now after having excelled and having reached the finale, now my motive is to get the trophy home.

Was it easy for you to manage Pavitra Rishta and Nach Baliye at the same time? What has been the biggest challenge for you?

The biggest challenge for me in the entire season of Nach Baliye is to make Asha understand all the technicalities of dance which is very difficult. There are certain times when you have to lift your weight while performing on a particular dance form and Asha cannot do this. So, this has been the biggest challenge and the second thing is that Asha is really lazy. She is the master laziness. So, to get her working on her toes round the clock was a difficult task because the queen needs her own time to get out of her laziness but still she has done a great job and she wasn't that lazy throughout the season because we kept shouting at her that we have to rehearse and keep working. 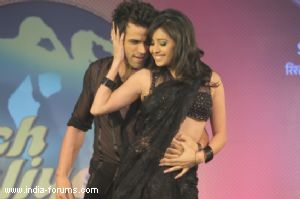 How did you help Asha a non dancer with her dance performances? What extra efforts did you both use to put in apart from your rehearsals?

All our efforts were put into the rehearsals and doing something which was out of the box. We always have tried to put in something new in our acts that are very different. We tried Jugalbandi in our Michael Jackson act; we performed on sticks and many more so we have always done something different. All our efforts have gone into dancing and how it should look like.

Now what are your views about Asha as a dancer?'

She has become an exceptionally good dancer now and she can now definitely stand up on her own as a great dancer and compete with anybody.

What do you feel about the comments given by the judges to both of you?

It's always been great and means a lot to us. There have been times when our performances were not up to the mark so we were criticized by the judges. It's not just that they have always praised us but they have also criticized us by explaining what went wrong. We have always listened to them and acted upon the same every week so that we can improve the next week.

How do you both support each other?

Just by being with each other! Sometimes Asha feels really weak at times because she is not used to in putting that much of hard work and extra efforts. So, I just try to make her happy and pamper her.

What kind of support you have got from your co-stars in Pavitra Rishta?

They have been very supportive from the beginning till now. They took out time to give us personal messages when we started with this show. Everybody is following the show and voting for us as well and not only the people from our sets but people from outside also are voting for us and it's a great feeling of getting so much of support from everyone.

Which is your most memorable moment from Nach Baliye?

That was the time when I proposed to Asha and sang a song for her.

As the finale is round the corner how are the preparations going on?

The preparations are very hectic and we are giving our best for the finale performance. We hope that we will do our best and we take the trophy home.

What are your expectations from this show and who do you think as the toughest competitor for you?

Undoubtedly, I want to win the show. We have got great scores and we are the highest rated couple in terms of numbers and we have been consistent enough so it's good. We are glad to be in the finals and we hope to win it as well. I feel Gurmeet Choudhary - Debina Bonnerjee Choudhary and Ripu Daman Handa - Shivangi Verma are the toughest contenders for us.

Well, Rithvik keep up the good work and wish you all the very best for the Nach Baliye season 6 finale!

ZunairahLAshvik 6 years ago Rithvik congratulations you said and you did it wow love you Rithvik and Asha you guys DESERVED...keep WINNING everything you touch!!!!!

danceismyworld 6 years ago Gurmeet Choudhary! You have done fab in NB nd you deserve to win the trophy. Love ya

happygolucky 6 years ago I wish and hope you n Asha win the trophy:) May God bless you !

sayeed007 6 years ago i'm so glad to see you and asha in the grand finale.. i wish u all the best. but i think NB6 grand finale was over last week or this week. this episode will not telecasted "live". i don't know if any audience knows who won NB6 where he/she already watched the competition. anyone knows who won NB6. if yes, then tell me answer.

GC_TheKing 6 years ago I love u

iloveD3 6 years ago Rithvikkk :D First of all, hats off to you and Asha for all these wonderful weeks of struggle, hard work and dedication. You both have certainly outdone yourselves and lived up to even beyond all our expectations! All of your performances had some spectacular finishing touch to it, which made me love you guys even more! May you and Asha set the stage on fire with your scintillating moves tomorrow and succeed in winning the Nach trophy! I'm sure the AshVik magic will be recreated yet again! We will all definitely vote AshVik to the top and make you guys win, for sure :) My best wishes to you both alwaysss. Love you two sooo muchhh :D :* Chak De Phatte! xD
- Jyothsna :)

Ashi22 6 years ago Rithvik Dhanjani and Asha Negi the best couple of NB6.

aleyammakroy 6 years ago #DIAL 18001202311 FOR RITHVIKASHA VOTING FOR RIYHVIK-DHANJANI & ASHA NEGI THE MOST DESERVING WINNERS AND BEST DANCERS ON NB6 SET.