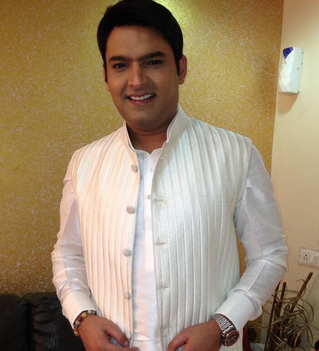 Popular comedian Kapil Sharma is happy that Sunil Grover, who became popular as Gutthi on his show 'Comedy Nights with Kapil', is returning to the small screen with his own show and wishes him best luck.

"It's good. Everybody has the right to do what they want to do," Kapil said here on Thursday at the red carpet of the 9th Renault Star Guild Awards.

"Even I made my show after leaving another show ('Comedy Circus'), so he also has the right to do so. My best wishes are with him. I wish he does well," he added.

Kapil came in the limelight after winning the third season of 'The Great Indian Laughter Challenge' and later he featured in 'Comedy Circus' and its various seasons.

Kapil feels that "everybody who is talented has the right to rise."

Sunil, post his exit from 'Comedy Nights With Kapil', was seen at award functions and reality shows.

His new show will go on air on Star Plus later this month. The promo of the show has been shot, but its title is yet to be decided.

mandy001 6 years ago take a bow kapil sharma...u rock. i feel sunil z nt a competitor for u bcz u r far better than him. he left ur shw bt in promos he z acting like guthi...nd u made him as guthi...

anyways best of luck to him bt i hv no plans to watch his shw...

PrinceASRsDhani 6 years ago Aww such a sweet and a pure hearted person you are kapil...Love you...Keep it up the good work...You are the best!

.Shivam. 6 years ago This man Kapil Sharma is a role model for kids. So positive! My best wishes r always with you Kapil

meghu2000 6 years ago You are so respectable.. How can someone be so good? You rock!!

Buhahaha 6 years ago Hats off to your stand :) Indeed u r a person to be admired by everyone.. u r a person who truly respects talent. Way to go bhai :) n thr s no one who could give takkar to u.. u r d best :) Proud to be a follower of urs..

TwilightStar_JP 6 years ago This is called being humble!! You are a human Kapil Sharma and I'm proud to be your fan! Period.

phoo_honey 6 years ago kapil u rock!! cnwk rocks too. all the very best to Sunil Grover.

Rishi_ 6 years ago Sunil was thrown out for his tantrums. He's no competition for Kapil really.
Kapil rocks :)

PureDrivenSnow 6 years ago kapil u rock!! cnwk rocks too. all the very best to Sunil Grover.