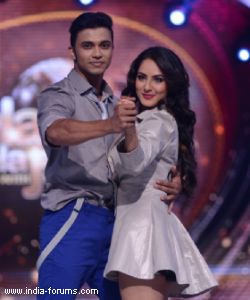 This pretty petite actress who claimed her fame through Life OK's Devon Ke Dev. Mahadev, speaks about her ongoing stint on Colors Jhalak Dikhhlaa Jaa Season 7, about her encounter with different dance styles, her toughest contenders and much more in this exclusive chat with TellyBuzz. Read on to know more about her!

What made you to opt for a reality show like Jhalak Dikhhlaa Jaa Season 7?

As far as reality shows are concerned, I have not done any till now. And I chose to do a dance reality show specifically because it does not have any physical and mind boggling task involved in it. Shows which have stunts in it to perform are just not my cup of tea. Dance reality shows are not dangerous also. My second reason of taking up a dance show is I love dance and I didn't have to think twice before participating for a dance show. And thirdly, I always wanted to get into mainstream Bollywood. So what better opportunities to show case your talent than Jhalak Dikhhlaa Jaa Season 7? Moreover, I want my viewers to know me as Puja Banerjee.

You have your co actor Mouni Roy as one of the contestants. Do you find her your competition?

Mouni and I have been good friends even before Devon Ke Dev. Mahadev happened to me. As far as my competition in Jhalak is concerned, I feel all of them are my competition. Mouni Roy, Shakti Mohan, Akshat Singh are some of the fantabulous dancers we have on Jhalak this season. We have a variety here to showcase to our audiences' and also this time the judges have become stricter and the concepts, dance forms which we are given are also very rarely seen on Indian dance reality shows.

What are you expecting yourself doing on the Jhalak stage?

Till now I have tried my hand on dance forms like Contemporary, Bollywood and Tollywood. Judges commented good for my Tollywood performance. For this week, I have taken up Kali as my dance form. Rajit (Puja's choreographer) thought since I have already done this for Mahadev, it would not be very difficult for me to cope up with this dance form. This dance form is new and is very different than the forms which audiences' have seen till now. It needs a lot of strength and energy and people think twice before taking up a dance form like this. It is very much Indian.

Who do you think is your toughest competitor?

I find Akshat Singh my toughest competitor. He is the cutest and very adorable. He had done a Bollywood dance which had dialogues incorporated in it. I keep teasing him on sets saying hello, Devi Prasad hai kya? (Laughs aloud). At his age, we were not even close to him what he is doing today. He is an extremely talented boy.

There were media reports saying you have bid adieu to Devon Ke Dev. Mahadev. What was your reason behind leaving the show?

No! I haven't left Devon Ke Dev. Mahadev. It is just that I am not able to give much time to the show so the makers of the show brought in the Bhilini Devi track. The channel and the production house have been extremely supportive and they understand my problem of time constraints.

How was your experience dancing in front of an international judge Maksim Chmerkovskiy?

It is our good fortune that we got an opportunity to showcase our talent in front of such a talented dancer and choreographer. Recently Rajit and I had performed on Tollywood and he liked it so much that he thanked us for introducing him to new dance style which he does not know of.

We have observed over the period of time that you give your best shot only when you are in the face off. Why so?

Hahaha! That is not true. Nobody wants to get into the face off round. We just make sure that we do not get nervous while we are performing and get under pressure. I just go and perform what Rajat has taught me without thinking of what will happen in the face off round.

But according to me, my best performance was of the first week.

In this 13 week long journey of Jhalak, how far are you seeing yourself?

I wish I atleast be on Jhalk for six weeks, atleast half the journey. But all of this also depends on luck. Like for instance, Lauren Gottlieb is an amazing dancer and she gave some exceptional performances on the Jhalak stage but she did not win. So yeah! Let's see how far I go.

While this is what Puja had to tell us in this exclusive chat, we also spoke to Rajit and this is what he has to say -

This is your first season on Jhalak Dikhlaa Jaa. Do you feel this is a drawback to you?

Yes definitely this is my first season but I do not feel this is a drawback for me. I have pretty good experience. I was the fourth runner up of Star Plus's Just Dance and also have worked with choreographers like Vaibhavi Merchant.

What do you have to say about Puja and her performances?

She is a good dancer. She feels I am strict. But I am strict only while we are working otherwise all good (smiles). Our first episode was not the best but it was good. Judges came to know about her strength which is her flexibility. She showed up in the second week and improved a lot from the first week. Slowly and gradually she will see herself growing from'A' to Z'.

Well, TellyBuzz wishes Puja and Rajat all the good luck for their stint on Jhalak Dikhlaa Jaa Season 7.

trishikarajput0 6 years ago Luv u Shakti Mohan
u r awesome...
u were looking so cute and beautiful in pink costume...
Loved your dance...
full on energy...
Luv u my rockstar...

trishikarajput0 6 years ago luv u shakti mohan...
Finally I can watch your performance today...
eagerly waiting for your performance...
Hope you get full marks...
U r mindblowing...
no one can dance like you...
keep rocking like always...
love you my rockstar...
I know u will win jhalak...

foram. 6 years ago Mouni Roy, love you dear
and all the best