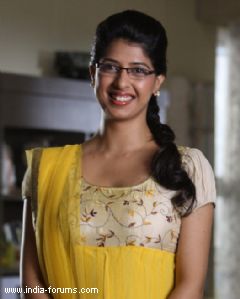 Aishwarya Sakhuja who is currently seen in Sony TV's Main Na Bhoolungi as Shikha is back with a distorted look. The actress talks to Tellybuzz of how difficult it is to look equally bad on screen.

The pretty looking actress Aishwarya who was seen in a simple look in her previous show Saas Bina Sasural and now who is seen in similar look too in the show Main Naa Bhoolungi, however says that looking bad on-screen also takes much of your efforts, "It takes a lot of hard work to look good on screen but for the first time I've realized that it takes equal amount of hard work to look bad on screen too with the help of make-up. Every day I take an hour or sometimes more than that to get ready."

Aishwarya feels that only a powerful character of Shikha would be able to pull off the show and regain the interest among viewers, "Shikha is back with a distorted face and I feel that it's very challenging to pull the show with such kind of a track in the show. In the coming episodes you'll see Shikha's fighting spirit to get back her child and to know the reason of why she was ditched by her own hubby," she says.

When asked Aishwarya if is there any similarity between her show's story and the story of Rekha- Kabir Bedi's blockbuster film Khoon Bhari Maang? She says, "I don't think so as in the film Rekha was pushed in the lake and then crocodiles attacked her while I was thrown from the cliff. Also in today's time there are so many women who are burnt alive or thrown out of the house for many reasons. My serial portrays the story of one of those women and I feel glad to be part of it."

Looking at Shikha's agony and her distressed life, Aishwarya says that many women have started supporting her but however, her family members still hate Sameer for his ruthless behavior, "My dad hates my on-screen husband Sameer (Vikas Manaktala). My taiji has stopped watching the show because of what Sameer has done to me. I still do get messages from women stating that you are giving strength to us. There are other women who are showing their anger towards my on screen husband. So it's a kind of mix reaction that we are getting from the viewers."

Aishwarya is happy to portray Shikha's character as she thinks that is important to live the character as it will be justified then when enacted on-screen, "I'm not just living the character on screen but now have been taking this baggage at home. It's difficult to run away from the character of Shikha as I can't get rid of it. I pack-up, go home, watch my serial online and go off to sleep. The other day again I'm back on the sets to shoot so there is no time to distress myself. I feel it is better in a way as it is very important to live that character or else I won't be able to do justice to it," she concludes.

We wish high spirited Aishwarya aka Shikha all the very best for the show Main Naa Bhuloongi!

7 years ago Amazing show
give me goosebumps everytym i watch

amreen2000 7 years ago I like this serial , as it's moving swiftly and not dragging unlike other serials. I just hope the interest holds and doesnt fizzle out.

+ 2
7 years ago Am liking this show a lot. Even if ere seems to be some similarity to the movie its being handled very well. Good power-packed performance by all.

chupBILKULchup 7 years ago Aishwarya u r doing justice to the character shikha.Love ur show.waiting for tonight to come soon.U r giving spirit to many woman who r betrayed this way.Long long way ...go on dear.We love u.

+ 2
7 years ago Do hope the show is nothing like Khoon Bhari Maang. slight similarity is ok. also hope it does not loose it's focus

+ 3
10 years ago hope rahat fateh ali is fine n he continues singing for the movies so that we can enjoy his songs!!