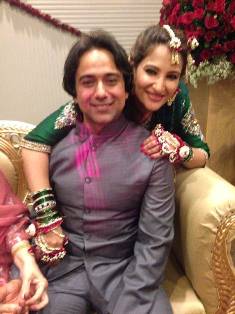 After almost a decade of togetherness the much in love couple Sachin Tyagi and Rakshandha Khan are all set to take their wedding vows on March 15th. The couple has planned for a cosy yet elaborate wedding with their close friends looking forward to the Sangeet and Mehendi functions. The celebrations have already started and we have heard that friends and family are all excitedly putting up interesting acts to keep everyone entertained.

When we called Rakshanda she was unable to talk much as she was busy applying mehendi, "It feels great but I cannot talk at the moment. In fact, 15th is the wedding and I am totally busy till the 17th. Even now as we talk someone is applying mehendi and I cannot hold the phone even... I am also down with a little cold so let's talk after the 17th" she requested.

Rakshanda who hit the headlines with the popular show Jassi Jaissi Koi Nahi was later seen in shows like Kyunki Saas Bhi Kabhi Bahu Thi, Kasamh Se, etc., while the recent shows where her work has been appreciated have been Devon Ke Dev. Mahadev and Bade Acche Lagte Hai amongst others. She is also a model and well known anchor for hosting live shows.

Sachin Tyagi is known to be intense and serious as an actor and as a person too. Not one to pick up any role that comes his way, Sachin had earlier said that he wanted to be a good father and give more time to his kids. He is also a singer who has won the Sahara One's musical reality show Jjhoom India and has been seen shows like Family Business, Kuch Apne Kuch Paraye while his recent acting stints include playing Raavan in Ramayan and King Huba in The Adventures of Hatim. He was earlier married to Pallavi and his two daughters Pari (12) and Saadhvi (11) from his first marriage have always stayed with him after the couple divorced when the kids were just babies.

All these years both Rakshanda and Sachin who were seen around town had always maintained that they were nothing than good friends and that marriage never crossed their minds. However, now that the couple has decided to take the relationship to the next level we wish them all the very best!

foram. 6 years ago happy for rakshanda and wish them a very happy married life ahead

.albatross. 6 years ago I'm so happy for Rakshanda! Congratulations to them both. :)

Disha Salian did not dial 100 before her death, says Mumbai ...
2 hours ago

Rupal Patel feels 'it will be wrong to say Saath Nibhana ...
3 hours ago

exclusive
Exclusive Roadies Revolution: A big fall-out between the contestants ...
3 hours ago