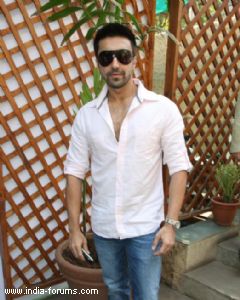 Ashish Chowdhry who is currently seen as Raghav Singhania in Zee TV's Ek Mutthi Aasmaan talks about how TV world has changed today, his family's reaction, what made him to come back on TV in a candid chat with TellyBuzz.

With changing trends on Television these days, Ashish feels that performance is not given due importance rather it's the delivery which is given more importance these days, "The creativity part on television is suffering today and I know that it's because to meet the dead line of dailies. Though today there is a lot of money on TV and it is becoming as big as Hindi Cinema. Again time is a big constraint but the reach to masses is much bigger. The only flaw in TV today is that the delivery is given more importance than performance but I don't want to blame anyone as it's the need of the hour," he states.

The good looking actor Ashish who is back to his acting profession after quite a long time says his family was undergoing through a trying time and this was the reason that kept him away from the big screen as well as from the TV world, "Earlier when I was doing shows; there were not many dailies and people use to wait for the next episode to air next week. I have missed shooting for 4 years as I was going through a rough phase. We faced bankruptcy and my dad too lost his business. Though now thank god that I've two businesses going steady that of security and ad agency. That was one reason for staying out of acting as I was focusing more on getting my business steady and secure."

The actor's son is also a big fan of the show Ek Mutthi Aasmaan and watches his show every day, "My kid's school is very nearby to my sets and sometimes he also comes on the sets to have lunch with me. Actually now he has started watching my show every day. So he tells me that 'I saw you today on TV and it feels great'. He is a very big fan and I must say the youngest fan of Ek Mutthi Aasmaan,"says Ashish laughingly.

Not many know that Ashish's debut was on TV. However, after being made to leave TV and making his way in Bollywood, Ashish says that he is pleased to be a part of TV, "Yes that's true and I was made to leave TV because at that time people had seen me a lot on small screen after which I felt chances of making on the big screen would decrease. But today I'm glad to be part of TV as this is where I started my acting career and the barrier that was earlier is broken. Movie actors today is seen everywhere on TV and its vice-versa."

As his last film Dhamaal was a laughter riot film, it managed to crack the records at the box office. So when asked Ashish about his upcoming plans in films he says, "Thank god my last film Dhamaal did well and I'm doing Dhamaal 3. The shoot of the same will start when Sanjay Dutt is released out of the jail. We all are waiting for that. So I've decided to do a daily soap, may be at least for a year as I feel it's a humungous market."

So what made Ashish make a comeback on TV? The reason for taking TV is also because my mom wanted me to do so. She said it's not possible for me to go out in theater and watch your films but at least I can watch you on TV'. Even my aunts in Spain and Dubai did tell me to go for television. Also this show has a good mass appeal and people can relate to the story well. It is not a typical Saas-Bahu saga. I'm very happy to be here and also the audience has accepted me," concludes the actor on a very happy note.

We wish him luck for his upcoming ventures!

namsworld 6 years ago Ashsih Chowdhry you are perfect for the role of Raghav Singhania!

Zoya677 6 years ago Ashish ur so sweet n amazing ...love u as raghav and I love ur acting a lot...god bless...ashish chowdhry rocks

Jennyluvhrithik 6 years ago I cnt xpln how much u r a gud actor wid a heart of gold.. yet agn u create magic in my heart.. i hv a huge crush on u frm d time of humko ishq ne mara.. My third most favourite movie..

KLDiva 6 years ago Love your acting on EMA. keeping rocking!

ragnarocks 6 years ago i never such a perfectionist, arrogance, sweetness, generosity, lover all carry so well...he is more than perfect actor...

Rush_25 6 years ago Ashish u r amazing as Raghav! U r doing a great justice to your characterization. RagNa are the reason to watch EMA.

Manoshono 6 years ago I am glad Ashish took up this project! Appreciating his work. He is doing a phenomenal job as Raghav!!

blackhole 6 years ago amazing actor with so much of potential...

kgphal 6 years ago Wonderful interview gud luci to u ashish