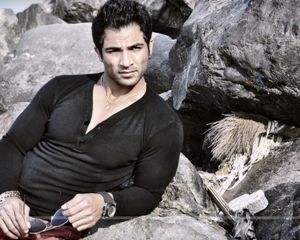 The dashing actor Mohammad Nazim who is currently seen in Star Plus show, Saath Nibhana Saathiya as Ahem is simultaneously working in a Punjabi film as well. Well as per the latest news he is all set to be seen in a Hindi film too.

So when is the film releasing? "Well, it is yet to be decided. As of now my Punjabi film will release first and then this Hindi movie. As I have stated earlier that the film is in the post-production stage so nothing has been finalized yet," Nazim explains.

When asked Nazim about the details of the film and the cast of the film he says, "I can't talk much about the movie but all I can say is that the story is based on real life incident. There are all new comers in the film including me. Few of them are from Splits villa - a reality show that used to air on MTV India and others are models."

He was very much impressed with the storyline of the film and as horror a film doesn't take much of time for shooting that is why Nazim took up this offer, "It's because the story was very appealing and also such movies don't take much time to shoot. There are only one or two locations needed for the shoot and also it's not a lengthy process to shoot the film."

Nazim who is very well appreciated for his role of Ahem in a popular daily soap is not very keen to play the character post leap. As the news has been making the rounds that the show Saath Nibhana Saathiya is soon to take a leap, when asked Mohammad Nazim about the same, he says, "Well, if the leap is between 5 to 10 years then I don't mind but if it's more than the specified age then I'll have to think about it. Right now nothing has been finalized so it's not right to talk. Yes, if the production is keeping my look the same then I wouldn't mind continuing it."

We wish Mohammad Nazim good luck for his upcoming films!

_pari- 6 years ago Love u very much Mohammad Nazim ,i am sure that you wil make best out of this opportunity...
Best of luck for your movies
May god bless you
Keep Rocking...

Shweta2111 6 years ago Wow All the best Mohammad Nazim for both the films,Sure you rock this also.Keep rocking "ROCKSTAR MOHAMMAD NAZIM"...

Nazim You are a marvellous actor & indeed the best..Keep stepping up in ur career & ur life !!..Stay blessed & Stay smiling always..Love you..You are truly touching new heights everyday in ur journey as Ahem in Sns..Hats off to U for ur wonderful performances..We wish U all the best & good luck for ur future endeavours !!..You are simply awesome & shine as a star..Keep up the brilliant work..With each passing day you are getting better than the best..Take a bow for the amazing portrayal of Ahem... Keep on giving ur phenomenal performances & Keep on shining.. !!Wish U get every bit of success & appreciation U deserve !!Stay blessed always..Love you Loadz Mohammad Nazim..May u succeed in your life & entertain us with your stunning acting more and more...You are truly a gem !!..Words are n't enuf to describe ur goodness & talent..!! Nazim when ever you get screen space you do wonderful job,one thing more yours fan always there for support you in everything..!! We all waiting for u get more powerful and strong role...!!They never give u much screen time which ur deserve 100%,they all r crap,but we always their for u...!! You deserve greater appreciation & better ranking in India-forum.!!..You are the best for me..God bless u & Take care..!! Your hardwork & dedication will bring good results in the form of new shows & more fans too...Keep on rocking !!..Looking forward to see u in new shows too now..!!

aleyammakroy 6 years ago I WISH YOU ALL THE BEST FOR YOU UPCOMING FILMS,PUNJABI AS WELL HINDI. I AM LOOKING FORWARD TO SEE YOU THERE, MOHAMMED NAZI, YOU ARE A WONDER FUL GREAT ACTOR ,MAY GOD BLESS YOU.

Kanika999 6 years ago Good going Mohammed! U are a good actress and hot!

-GAINAA- 6 years ago Mohammad Nazim waiting for ur movies.

Hope u will rock the silver screen.