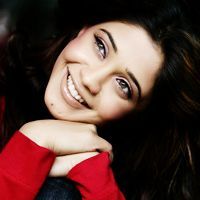 Amrapalli Gupta aka Tanveer of Zee TV's Qubool Hai is back in the show and she is playing a mother to Karanvir Bohra (Aahil Raza). Despite being of the same age in real Amrapalli portrays the character with ease and she is quite comfortable of doing so as she says, "Well not really. Yes we are of same age but I'm, comfortable playing Karanvir's mom in the serial. These days it's very common and actresses are not tagged or seen like this after their stint is over in the serial. So for me it's not a big issue."


Talking about her character Amrapali says, "This time you are going to see a different Tanveer on screen, who is more calm and composed. I feel this is a new step to the negativity of my character. You'll have to watch of what I'm trying to say but I'm sure that people will love this change. I'm glad and thankful to my viewers for loving Tanveer so much."

When asked Amrapli about her rapport with Karanvir Bohra off screen she says, "Well I've not much interacted with him as we just shot for a day. Though we belong from the stage background it's easy for us to do the scenes. Also he is very punctual and disciplined actor."

"Like I'm punctual on the sets and have a habit of discussing the scene before the final take. Both of us do the same. I also told Karanvir that I use to watch his show Dil se di dua.Saubhagyavati Bhava? and I really liked him in it. So I'm taking my character ahead and it doesn't matter whether I play a mother or something else as at the end of the day, audience know of who you really are," concludes the actress talking about her equation with Karanvir and her character.

Well, it will be interesting to watch the upcoming sequence in the show.

pancakes527 6 years ago Wow really good. Most actors step back when they are asked to play the role of a parent. They don't understand that a role will not turn them into somebody else

-SHAIVI- 6 years ago Good Luck Amrapali , playing a mother at this early age requires courage and talent , and you have both .
KaranVir Bohra good luck for the show

pslove 6 years ago amrapali is actually a gem of a person.
i want to see the good side of her as ahil is nice at heart

oldooz 6 years ago Amrapalli has perfectly played her character as Tanveer and that's why we all the Qhians hated Tanveer a lot.
Post leap playing a mother to someone of her age requires a lot of dare . waiting to see the change in her character.

nikki.171 6 years ago Amrapalli Gupta is great as the much hated horrible Tanveer. And Karanvir Bohra is doing an amazing job of playing Ahil. Surbhi toh as always is rocking. Qubool Hai has interesting days ahead.