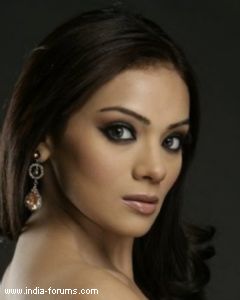 Megha Aditya Shroff who was last seen in Yahan Main Ghar Ghar Kheli is back with a fiction show Khauff Begins - Ringa Ringa Roses. She is paired opposite Sameer Soni in the show. In the meantime Megha was busy doing ads and she has also featured in the Nestle ad for Pakistan.

When asked Megha about her character in the show, she says, "I play Sameer's wife in the show and I am really happy to be back to a fiction show. As the story moves forward it will be seen that how her family life is affected with her hubby's profession who deals with paranormal activities."

Elaborating more on her role she says, "My character's name is Aaliya and I have a daughter. Their life is affected because of these activities. With strange things occurring in their lives, Aaliya tries to cope up by facing situations and then decides to move on with her life which will be interesting to watch in the show. I can't reveal much though."

Megha has been absent from this industry from quite some time now. So was she spending time with her family and busy giving time for her married life? This is what Megha had to say, "Well, I was always here and had been doing ads. I recently shot for a Nestle ad for Pakistan. It was a wonderful experience. They are good people and I got a warm welcome there. In the unit there were people from different countries and I was the only one who knew Hindi. People in Pakistan speak good Hindi and I was the one who translated it to others in English. I had a nice time with them."

She further adds saying, "Also I had done ads for UK, Japan and few different countries but these ads are not shown in India. Thus people must have thought that I was on break. As I'm married I didn't want to do a daily soap. I want to focus on my family as well and spend as much time with them as I can. So when I got this bi-weekly show offer I was okay since I don't have to give my 30 days."

Megha was getting offers for some on-going shows too but she was not keen on taking up those offers, and says, "I had got offers for on-going shows too. I wouldn't like to take the name of any show or character as I don't want to spoil my rapport with the industry and they were similar to what I have done in the past. I like to try my hand at different concepts. That's why you saw me doing episodics."

Now that she is back what kind of roles is she looking forward to playing on-screen, "I'm open for all kind of shows; fiction and even reality too as a host but I want to do a romantic role like that of Saanchi in Kehta Hai Dil...Jee Le Zara," replies Megha.

While on Kehta Hai..., we wonder on why was she not chosen to play the role of Saanchi since a source from the channel confirmed that she was in fact finalized for the lead role but when after the screen test, they felt that she did not match to Ruslaan Mumtaz and the character of Saanchi and thus Sangeeta Ghosh was confirmed for the lead."

When asked Megha about whether she had been approached to play the role of Saanchi in Sony TV's show Kehta Hai Dil...Jee Le Zaara, she clarifies, "I don't want to comment on that please. Though whenever I get time I do catch up the show and it's nice. All I can say is that even I would like to do a romantic show someday."

Well, Megha we wish you all the best for future endeavors!!

Rajash 6 years ago Kinda liking Aliya's equation with JD now even though they are estranged couple... still have some sparks between them

-sahasra- 6 years ago Y'day we got to see that on Maitri's insistence JD is ready to work on his relationship with Aaliya. Looking forward to see how JD's profession has affected their relation.Though they are separated, there's good chemistry btw them and hidden desire in their eyes to be with each other.

Khauff Begins is very intriguing.Screenplay is excellent.Lets see when and how cvs are going to reveal JD-Aaliya's story :)

Rush2220 6 years ago 'Aaliya tries to cope up by facing situations and then decides to move on with her life which will be interesting to watch in the show. '

Looking forward to see this. liked her 1st look in the show. All the best.

ak75 6 years ago She does not look older to Ruslaan. Good Luck for her new show..