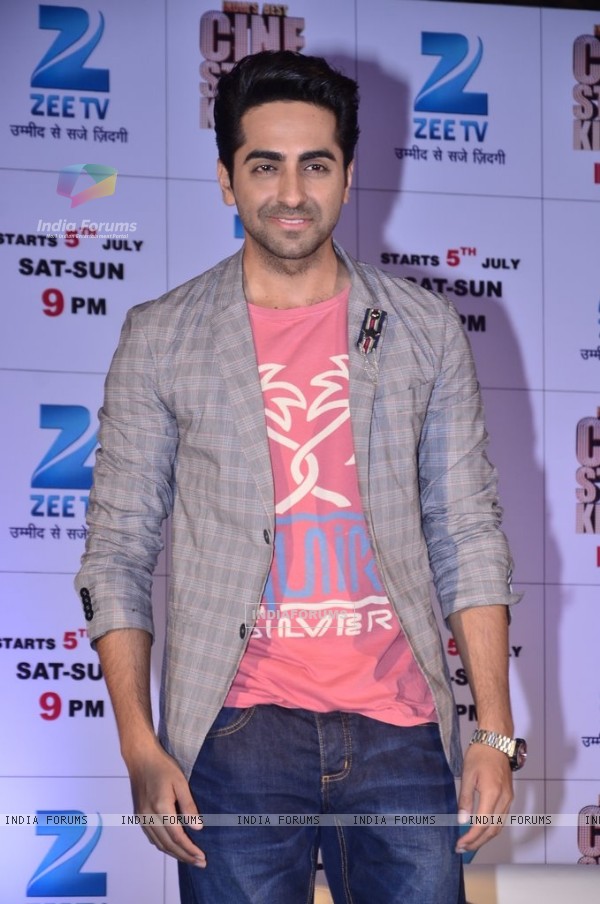 Talented actor Ayushmann Khurrana who started his journey with Television with a daring show MTV Roadies season 2 has already made his mark on the big screen with hit films. While he started his career on TV itself, Ayushman too gave his auditions for the popular show Cinestars ki Khoj way back during its first season.

The actor very much enjoys his association with the TV industry as he has hosted couple of shows like India's got Talent on  Colors, Amul Music Ka Maha Muqqabala and Just Dance on Star Plus. Now he will be seen as a mentor in India's Best Cine Stars Ki Khoj on Zee TV.

He will mentor the show the show only for two episodes due to his prior commitments for the films. We got in touch with the actor to know about his experience being a mentor on the show India's Best Cine Stars Ki Khoj and much more...


Ayushman says, "In 2003 I gave the  audition for Cinestar's Ki Khoj season one and I was rejected in the initial round. I was rejected from the show, so today it is quite strange that I am standing here in the panel as friend and as a Bollywood buddy this time."

He feels quite fortunate to share the screen space with noted actors and directors as this show  gives a platform to the aspiring actors, "In 2003 I remember I was a nerd who had spectacles, I was 10 kgs less, not 6 feet tall, used to wear braces and rest of the guys in Chandigarh who were in top ten, were above 16 years with an average height. These guys got selected from the region Chandigarh. Now the time has changed, the golden era of Indian Television has changed and the one who is talented and wants to be an actor can go ahead to be an actor as the doors are open for these aspiring people. And I strongly believe that success and preparation needs an opportunity which is given by this particular show India's Best Cinestars Ki Khoj is to recognize their talent of the young people who aspire to become an actor.

It feels great that I am in a company who have really made it big in the industry like Sonali Bendre who was a judge when I was an anchor for India's Got talent and Vijay Krishna Acharya who is one of the best directors of the country and I will be sharing panel with him. I feel quite fortunate."

The dashing actor avers that he completely understands the state of these contestants as they tend to get nervous as he has gone through the pressure of being in the same state once upon a time, "I can understand the state of the contestants when they are in the back stage getting ready to go on the stage and get nervous. I can understand as I have gone through all of it. There are two types of auditions one where you have to go to casting director where you have to hold a plank to give your right profile, left profile that is different and second audition is on the stage which again is different from the first one. All the reality shows which I have done till now I can call my self-reality show 'expert' jitney shows, auditions, reality maine kiye hai aur jitney rejection maine face kiye hai with those experiences, I can give an advice to the contestant. I can be their friend their buddy, philosopher, guide or whatever and I will be with them."

Boosting the morale of the contestants Ayushman talks about the mantra for the success and failure as he says, "I would like to give advice to the contestants that just maintain your sanity whether it is success or failure just be numb to the success and for the failure just be normal. I believe that if you have not faced any rejection in your past then you can never give the mantra to anyone or any advice that what one should do when he fails to do something which he desired to do."

Talking about facing rejections, the actor says, "When I was rejected I don't regret it because I think what happens it happens for good as I was not ready to face the camera that time. After becoming a VJ, anchor theater artist, I gained that experience and later I was more comfortable to face the camera. But I would say that when I was rejected from Cine Star's Ki Khoj I couldn't sleep the whole night because I thought I want to be an actor, I want to live my dream and I was rejected in the regional round, so that was the most devastating day of my life."

Never mind Ayushman, now you are a big star!

NiharikaMishra 6 years ago @nitzy_21
Yes he isn't, he mentioned it as a reason for his rejection!
Tall folks have better chances of getting in, though I am not saying its the sole criterion