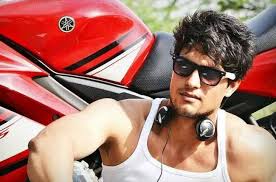 Newcomer Ankit Gupta who is currently playing the role of Parth in Channel V's Sadda Haq as Parth is willing to try Sky diving with his co-star and would love to do mountain climbing and trekking.

Let's see what Ankit has to share with us...

What is adventure according to you?

Adventure according to me is experiencing all kinds of sports.

My most adventurous day was when I did paragliding at Manali.

I want to do Sky Diving.

Who would you want to take for a thrilling activity from the industry?

I will go for skydiving with my co-star who plays the character of Yoyo in the show Sadda Haq, because he is a very adventurous person aur agar mujhe kudne mai thoda bhi darr laga to I will ask him to push me the way it is shown in the film Zindagi Na Milegi Dobara (laughs).

+ 4
6 years ago Ankit ur are superb actor and love ur expressions... sky diving interesting man ...

SamriAnu11 6 years ago You want it with yoyo paaji..n I want to sky diving With Ankit Gupta :p keep rocking :),

+ 4
7 years ago ankit Gupta you are so awesome in the role of Parth! Keep it up! Hoping for lots more from Parth's character ahead!

aiswaryasudevan 7 years ago i really loves his character a lot,
can't wait for next week episode.

+ 4
7 years ago Ankit Gupta...
Loved you so much in this week's episodes..
i'm happy your character is always given prominence instead of sidelining it..

7 years ago Love the intensity you bring to Parth's character!!!!