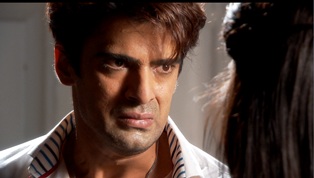 Enacting the role of an abusive husband who physically hurts his wife is a deeply disturbing proposition for any man who respects women ... and when you have an actor as cultured, warm and respectful towards the women in his own life as Mohit Malik, it's only natural that he would feel depressed and disturbed playing the villainous role. Currently portraying the darkest side of human behavior in Zee TV's Doli Armaanon Ki, Mohit is seen taking out his belt and viciously whipping his wife Urmi (played by Neha Marda).

Portraying the character of the chauvinistic, wife-beating Samrat effectively, the actor says, has been very taxing for him. Says Mohit, "I have been stressed for the last few days, I can't even sleep. The scene required me to be violent and I kept thinking, 'How can I do this? How can I look convincing as a man who beats up his wife?' I can't imagine the plight of women who face domestic violence. The shoot was so disturbing that I had to take sleeping pills. It's my wife Additie, who helped me through the crisis."

Settling his score with Urmi when she tried to prove him wrong in front of his entire family, Samrat ends up beating her with a belt. Not showing a sign of remorse, he continues his routine and goes to office the next morning like nothing as happened. Filing a complaint against him, Urmi ends up getting him jailed on the charge of Domestic Violence. While this took a toll on Mohit, it also ended up creating a lot of tension on the set, given the sheer negativity of the scene that the crew was shooting.

While otherwise, the entire team loves to share their meals and ensure that they gather around during lunch to have a pot luck of sorts, during this particular sequence, Mohit decided to stay isolated. Ensuring that nobody disturbs him while he gets the perfect look for the scene, Mohit kept to himself and barely spoke while they shot for the entire sequence. Asking his crew to keep everybody at a bay, he kept rehearsing his lines and dialogues in his head so that he gets done in a single take and can leave from the sets as soon as possible.

While the world is infuriated by the actions of his character, the actor himself shudders at the thought of the sequences he has recently shot for the show!

Gkathria 6 years ago Mohit Malik, you are an incredible actor and handled that scene to perfection! Even though this scene must have been hard for you to enact and took a toll on you, but you must have made a difference in at least one person's life and hopefully a difference in the India and the World

Intrepida 6 years ago Mohit is doing a wonderful job! thank you for taking on the magnanimous task of showing this side of society, it takes courage to do such a role, hats off to you!

MasoomaBukhari 6 years ago mohit is such a brilliant actor i must say... i really dont think anyone could have portrayed it better than him... u just rock man... and the way you are saying you felt its just so disturbing actually.. amazing performance throughout the show

and neha marda you're so perfect with your role.. love u my doll

you're one of the best

*Dev.* 6 years ago Mohit is a great actor and this has proved this. Any one will be disturbed after watching that scene so I imagine how hard it was for him to enact it! I feel bad for actors...but this proves that he is a great actor...and I just hope Smarat learns a lesson after this.

amreen2000 6 years ago Mohit you are an excellent actor and you play Samrat character very well, we love to hate your character. The lady who plays your mum is also very good.

-FrozenHeart- 6 years ago Mohit acts really well and Doli Arrmaano Kii is my second favourite show. Both of them rock.

But me and my mom hate certain people from the show-

1. Urmi's Dad and Grandmom - for being so retrogresdsive and still expecting Urmi to take back her complaint.

2. Shashi - for being the two faced narcissistic witch that she is.

ekta15 6 years ago he is doing a tremendous job .well done Mohit.

.giggles. 6 years ago A true actor enacts whatever scene he is told to act out. And Mohit has proved that he's a wonderful actor. Even though the scene was so disturbing he didn't turn away from his job. That's a true actor. Awesome job Mohit!