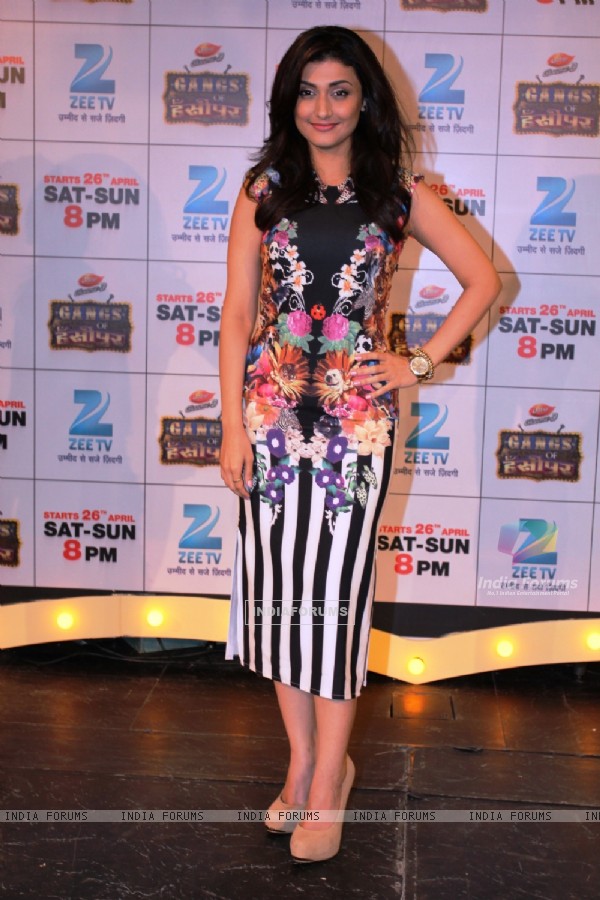 Ragini Khanna who is well known for playing the character of Suhana in Star Plus' Sasural Genda Phool, was absent from the TV for quite some time now. It seems that the good looking actress was busy focusing in films. Recently she has just finished shooting for an upcoming film and she is very excited about the film. While she was enjoying her relaxed time during acting in films, the actress has taken a decision to come back to small screen again. Ragini is all set to host the seasonal show Gangs of Hasseepur on Zee TV.

Well, the actress who was busy shooting for a film has lost oodles of weight. This actress was looking svelte and perfectly fine. So we were quite inquisitive to know about her fitness mantra and hence got in touch with Ragini who shares, "I have lost weight for my film. Actually I will say that I am into fitness and I love to be fit (winks). It's actually a trip the more I go into the fitness I have realized that it's addictive because you are following a great diet and you are working out continuously to achieve it and getting into the habit of doing it. I only eat what is beneficial for my body and I don't populate my body. Obviously because I am a non-smoker and a non-drinker; I am a teetotaler. So I give myself food whatever is required to live and whenever I have pastry now, I feel my body doesn't need it as it is not reacting as the way it should be. It's all a psychological play, the minute you control, its mind over matter. I was working hard to strive what I am today that is my fitness but have not reached my goal yet. My goal is to be fitter than what I am now. I believe in fitness and not in losing weight, so I eat right and working out properly it's because I have life as I am not doing any fiction shows (laugh). "

Having tasted the success at quite a young age, Ragini who is popular actor now says that many shows offers kept coming her way and she is happy that till date she is getting offers for new shows, "I don't feel that I have become a star yet. I seriously believe that I have just begun; I am even more struggling than what I have started off. When I started off I was very cockily confident. I started off with Radhaa Ki Betiyaan Kuch Kar Dikhayengi and if you see that show you won't be able to recognize me because in that show my weight was 70 kgs and for Bhaskar Bharti in a span of four months I lost some 14 kgs and that was my big transformation and that was the place when I really got noticed and then obviously people loved me for Sasural Genda Phool. I am a person who tries to do something different and with God's grace I am so blessed that I get offer every day for fiction and non-fiction shows. You name the show and it has been offered, I am not being cocky but I am being honest."

Actress Ragini is quite happy to bag this show Gangs of Hasseepur as she is not too keen in working shows which keep on dragging and then the content comes to a saturation point, "I like shows which has an end because dragging content is boring and that's why when Gangs Of Hasseepur was offered to me the creators told me that it's only a eight week show so I agreed to do this show. I am very happy that Sasural Genda Phool ended gracefully before people got saturated and were fed up of seeing Suhana. It was better that it gracefully took exit."

Ragini wants to play varied characters in shows as she is bit choosy and does not like the monotonous characters, "If I have to do fiction then I need a good character, If you ask me what kind of character I am looking for then actually I don't know the answer that for what kind of character I am looking for. Like when I got Bhaskar Bharti I never thought I will do a dual character, similarly with Suhana's character and I have even played the character of Dhoban of 19th century in the film Teen Thai Bhai which I thought must be interesting so I acted in the film. The other film which I did recently, I am playing the character which nobody would have imagined me in that space. Basically I am quite choosy because I have a commitment phobia (laughs)."

We wish Ragini Khannna all the best for her future endeavors!

anamika.sharma 6 years ago Tea tatler?!! Wtf? Who is this writer who doesn't know basic English? What stupid writers is India Forums hiring?

simim 6 years ago What is a tea tattler? Someone who drinks tea and then runs around telling tales about everyone to others?

bugsbunny12 6 years ago Love u Ragini Khanna ur my dream girl...

Gagani 6 years ago I am ragini,s big fan from her Sony serial Bhaskar Bharti. I wish to see her again on Sony channel as Lead. Ragini come back in fiction.

_Procrastinator 6 years ago And I love u becoz of this Ragini Khanna.. So Lo okin fwd To Ghoomketu... whateva u take Up Has Always been Exciting for Us Fans well ...keep Rocking sweetheart.

Barun_Addict 6 years ago I really loved ur acting in SGP