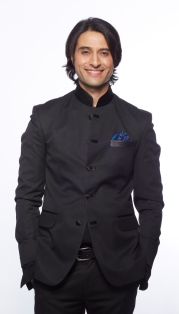 Last week we saw his elimination from the show, which left rest of the contestants in the house in a state of shock as he was a much loved contestant by all. But well it seems that Apurva is very happy with his elimination. On the same we got in touch with him to know more about his journey in the Bigg Boss house and much more.

Apurva seems to be very happy on his elimination from the house, as he says, "I am happy and delighted that I got eliminated at such a time where I could spend quality time together with my family as it was the occasion of Diwali."

Further elaborating his experience of staying in the Bigg Boss Saath 7 house he adds, "My stay in the Bigg Boss house was a roller coaster ride. Undoubtedly I enjoyed the ride. But after Shilpa got eliminated I was very much upset. Also I told all the housemates too, to vote me out as I wanted to get back home, I was missing my puppy, mother and Shilpa very much."

When we asked Apurva about the recent spat between Kushal and Andy due to which Kushal had to exit from the Bigg Boss house, this is what he had to say, "According to me it was absolutely Andy's fault. Any guy who would have had been in Kushal's place would have had done what Kushal did with Andy. I totally support Kushal and I wish to see him soon on the show."

Further we also asked him about the weekend episode with Salman Khan. The episode where Kushal, Gauhar, Tanisha and Armaan were spoken about the most as there was a fight between Tanisha and Kushal due to the task. Salman Khan seemed very angry. About the same Apurva said, "Well, no comments on that episode at all."

We wish Apurva Agnihotri all the very best for his future endeavors.

IPKKNDfan4ever 6 years ago Apurva Agnihotri was one of the nicest and balanced man in BB...who had a gud equation with everyone..
love his support to Gauahar Khan and Kushal Tandon...

Hope Kushal is back just to show sum ppl dat he WASNT WRONG AT ANY COST !

Sonal99 6 years ago Was Apurva not caught with his wife Shilpa having drugs?? Maybe he was off it while doing Biggboss so he looks sober and decent there.

littlesmile 6 years ago #respectapurva.he is the most dignified guy in the house.Yes we too want kushal back in the house apu &lt;3

khushboo_kzk 6 years ago Apurva you're nice, honest men...as well as an excellent actor.thank god you just came out from that dirt.enjoy your Diwali with your wife shilpa and your family.
i just wish you happy Diwali...
i luved your bond with heaven, going to miss it...
i don't think so big boss will giving kaushal another chance, because i read it somewhere that salman don't want to see kaushal again in Big Boss house...kaushal done some mistakes, he should not get physically violent with andy...but if Kaushal is out, then what is Andy darling and armaan fellow is doing in BB's house.
they both should also throw out from BB's house...then only it should be fair because what andy done with gauhar is disgusting and armaan fight and disrespect every women and other contestant in every moment...

Loveagain 6 years ago you did really well in Bigg Boss Apurva!

rekha02 6 years ago Apurva , I agree with your big boss experience even it was an experience for me as a viewer which stopped the day you were evicted . Anyways you seem to have lost loads of weight and plus the new hairdo suits
you . I wish you a great future and hope your dream of direction will be realised soon. All the best

Compare this pic with his current pic. Shilpa, you shouldn't have done that psycho act. I'm still having sleepless nights because of her.