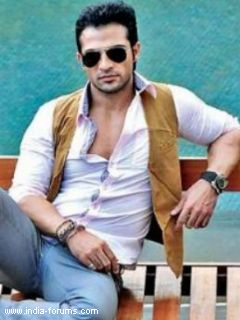 Television's popular hunk Mohammad Nazim who plays Ahem in Star Plus' popular show Saath Nibhana Saathiya has undergone a transformation in his character; from being a son to a husband and now he is playing a father on-screen. In a conversation with Nazim, we tried to find out his view about the evolution of his character and much more.

Talking about Nazim's character which is shown currently in the show, he told us, "Ahem has become irritated now. This irritation has come because of the affection he has towards Gopi (Devoleena Bhattacharjee). It happens that sometime we affectionately fight with a person whom we love. In such situations we tend to fight with the person in such a manner that the other one shouldn't feel bad. Ahem is really irritated now as he feels that Gopi is responsible for Meera's death and out of this irritation, he wants to take divorce from her. In such kinds of situations, it happens that we don't want to go close to the person with whom we have fought but at the same time we also don't want to stay away from that person because we start missing them when you start cherishing the memories of the time spent with that person. Ahem is going through the same phase in the current track."

We asked Nazim whether he feels that his character is being portrayed like the same which was being shown in the beginning, to which he said, "Initially, Gopi was an illiterate girl who belongs to a middle class family and Ahem is married to her. Since Gopi was an illiterate he used to dislike Gopi but now, Ahem has changed himself because of her. His behavior towards his family too changes thinking that she is the reason about the mis-happening with Meera."

Voting procedure is going on so we asked Nazim whether he is going to his hometown to cast his vote and what changes he would like to see in his hometown, he told us, "Yes, I am going to my hometown as I am going there for some of my work and I will be voting there too. I belong to a very small town and I wish to see more improvement in the education system in my hometown. I wish to see development in English medium schools there and I want things to become more advanced there. The condition of roads should be improved and shops are very far away so I wish that these things should be taken care off."

Lastly, we also quizzed Nazim about the release of his movie. Nazim added, "The talks for the release of my movie release are on and it's expected to be released soon. I am comfortable doing both. Television has given me an identity and work is work."

We wish all the very best for your future endeavors Nazim!

Have a great day !!... Such a talented, natural performer U are & extremely adorable--Mohammad Nazim...All the expressions, emotions & sentiments of urs as Ahem are perfectly portrayed by u !!..Keep on giving ur best !...God bless u...Love you Loadz...

_KOYEL_ 6 years ago You are the most versatile & hardworking actor.. Keep on thriving more & more !!..God bless u & grant u all the success & happiness in ur life !!...

Jaylaxmi 6 years ago Mohammad Nazim You have incredible acting talent & Our wishes are to reach new heights & achieve much more,God bless u...

DHARNA_ 6 years ago Nazim U are best as an actor and Human being...You are a sweetheart , calm & wonderful person...God bless u & Wish you all the goodness in life !

Ziniaa.Nazimfan 6 years ago May Allah fulfill all ur dreams & give u lot of happiness...Mohammad Nazim...!! ...

Chetna21 6 years ago Mohammad Nazim,keep rocking...love u and one most important thing which i love in u is ur down to earth nature...God blessed u dear..