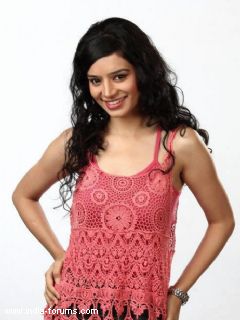 The very beautiful and popular actress Sukirti Kandpal who perfectly portrays Simran in Kaisa Ye Ishq Hai... Ajab Sa Risk Hai on Life OK, balances her image while portraying the role of Simran well in the show. The actress is quite content with her show acquiring decent numbers in TRP charts and the feedback she is getting for her role.

TellyBuzz spoke to Sukirti to know more about her experience of portraying Simran in the show and much more.

How has been your journey in both the seasons of the show Kaisa Ye Ishq Hai... Ajab Sa Risk Hai so far?

How has the character of Simran evolved so far from season 1 to season 2?

The character has evolved 360 degrees from season 1 to season 2, from a modern girl to a girl living in a village. It's her decision that she wants to live with a village guy whom she loves. It's good for me as an actor because, I am able to explore new things which probably I have never thought of. It's been a good journey and I think that Simran's character has been changed eventually which is also the concept of this story.

Playing a modern girl or a village girl; which interests you the most?

If given a chance to change one trait of Simran then what would it be?

I wouldn't want to wear a Palla on my head. I want to take it out and leave my hair open and live a very happy life. I don't want to change anything about her; I just want to take the Palla out of my head.

You have played different characters in different shows, which according to you has proved as a turning point for your career?

For me to play the character of Dr. Ridhima in Dill Mill Gayye has been the biggest turning point of my career. I never had to look back. Then my characters in Pyaar Kii Ye Ek Kahaani and Agle Janam Mohe Bitiya Hi Kijo were also proved as a turning point for my career. They were big shows and I enjoyed my characters thoroughly. Pyaar Kii Ye Ek Kahaani gave me a chance to do what I really wanted to do. I played a college going girl and did a love story. I enjoy doing love stories. I would say that every show has been a turning point for my career but these three shows hold a special place in my heart.

What has been the biggest challenge faced by you so far?

If I have come across any challenge then I have got over it after a point of time. Either I didn't get challenges or I have faced them well. I feel that I had quite a fairly smooth walk so far.

What kind of feedback you get from the fans?

I get mixed feedback from the fans. A lot of them like what I am doing while others want me to do different things. Feedback always encourages me to do good work. A lot of people love me and love my work which makes me very happy.

What are your interests other than acting?

My interest apart from acting are Traveling, talking on the phone, chatting on BBM, Whats App and going for shopping.

After achieving so much, is there anything which is still missing in your life?

I have worked hard and I believe in hard work to achieve the best things in life. I have so much to do now; so many channels to work with, so many aspirations, so many looks that I want to try doing. My standards are much higher so I don't know how many years it would take me to achieve more than what I have achieved today.

Do you dream to get into Bollywood?

I have not really thought about it yet. A lot of people do ask me about it saying I should get into Bollywood. I believe that things happen when they are meant to be. After this show, I would be looking for something exciting in my life.

We wish Sukiriti all the best for her future endeavors!

Sunny Singh shares secrets that keep him Motivated to achieve his ...

bellaaa 6 years ago like the way you are Sukirti Kandpal &lt;3 ...

ridzisharma80 6 years ago I like ur all shows...u r very much talented...I like ur smile...nd acting skill...

paripyia 6 years ago SUKIRTI KANDPAL Good Morning .Have a lovely day & an enjoyable weekend ahead !You are a stupendous actor, so graceful & sweet in nature .God bless u &May U always succeed !Wish to see u in newer shows too..Love u baby so much

babysuku 6 years ago SUKIRTI KANDPAL Good morning .Wishing you a great yet relaxing weekend ahead ! You , Your amazing acting skiils, your sweet smile & your portrayal of simple & cute all are just fantabulous & awesome .God bless u & Keep progressing higher & higher Love you Loadz 4ever

Kangana Slams Anushka for Raising her Voice Against ...
18 minutes ago

'RadhaKrishn' Fame Vaidehi Nair Roped in For 'Brahmarakshas ...
23 minutes ago