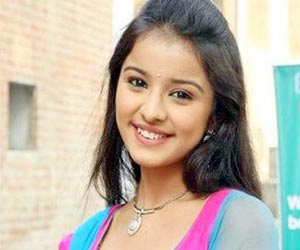 The young and talented actress Mahima Makwana who is seen playing Rachna in Zee TV's popular show Sapne Suhane Ladakpan Ke now relates herself to the character of Rachna ever since her character has evolved as a confident girl.

TellyBuzz spoke to Mahima to know more about her feelings of playing the character and the special bonding that she shares with her co-star Vaishnavi Mcdonald Mahant.

Let's see what Mahima has to share with us...

I am growing each and every day - "It has been a very interesting journey so far and I have got to learn a lot from the character of Rachna. It's my first show as a lead so initially I was scared of playing this character. My co-actors, cameraman, director, and everyone on the sets are really very nice. Each and every day I am growing and learning a lot of things from everyone."

It's not an easy job to manage study and acting together - "Currently I am studying so I don't get time to think other than studies.. I have to shoot for 30 days for 14 hours each so I have to manage well between my shoots and studies. It's not an easy job. I study on my sets and I take the notes over the phone."

Vaishnaviji gives me a motherly feel whenever my Mom is not with me on the sets- "Vaishnavi Ji who plays the character of Shail on-screen is my room partner. She is a very nice actor to work with and I share a very good bonding with her and get to learn a lot of things from her. Whenever, my Mom doesn't come on the sets, at that time I always get a positive vibe from Vaishnaviji and gives me a motherly feel. She cares like a mother on the sets. She is a very nice person."

I can't leave this show in between for some good offers - "I haven't decided anything yet. I am getting many other offers for movies too. I am doing such a great show and this show has given me recognition so I just can't leave it in between and start doing something other. I think after this, I will do something bigger than this."

-Trishh- 6 years ago Only watch the show for u!!! Congrats on getting the Best Beti award

DramaKuween 6 years ago Happy the way Rachna's character shaped up with ups and downs.. Hope she gets love of her life this time..

pallavi25 6 years ago Mahima Makwana rocks as Rachna! Congrats to her for winning Best Beti Award!

-LiveLaughLove- 6 years ago You are doing great in SSLK Mahima, the audience also loves how Rachna's character has evolved!

Kikidramagirl 6 years ago Girl, you are amazing! Watching this show just for you and Piyush now! So glad you got an award! Finally got what you deserve

PariDsouza 6 years ago Always watch this show for you. Love you Mahi :)

MaayaRam 6 years ago God bless you Mahima. You character is really good and natural like any other random girl not born with superwoman power lol.