View Profile
Srishty Rode is amongst the very few actresses in the industry today who was blessed with one lead role immediately after the other moreso after an abrupt end of her previous show Yeh Ishq Haaye.

After staging her potential in the Star One show, the actress is presently seen on Zee TV's Shobha Somnath Ki produced by Swastik Pictures. In a candid chat with TellyBuzz, the actress shares her experiences of working in the show with her father for the very first time. 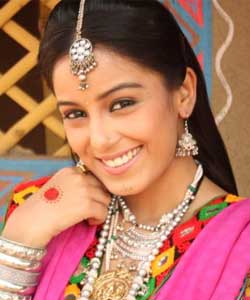 After portraying the lovey dovey role in Yeh Ishq Haaye, how is it portraying the tough role of Shobha?
Of course it is tough, but at the same time it is fun riding horses and fighting with the swords that ends with bruises. Recently I slipped while I was trying to get on to the horse.

Yeh Ishq Haaye went off air in an abrupt manner. Did it come as a shock?
Not really because we already knew that the story was not moving in the manner which we had expected and also a lot of actors were replaced in the middle. We also came to know that the channel was undergoing a revamp which confirmed the speculations. And there were other shows also that went off air and not just ours. So that was a relief (laughs).

Was life tough after Yeh Ishq Haaye went off air?
I cried a lot when the show went off air because it was the first show where I played the lead and it evidently was close to me. People knew me as Manjari and the show gave me recognition. But at the same time we have to realize that we have to move on in the industry and after a while I got adapted to the fact that I do not have to get up early to go for shoots (laughs).

How did you bag the role of Shobha?
After Yeh Ishq Haaye, I had auditioned for Phulwa, but it did not happen for some reason and I got a call from the production house to play this role. I was in two minds as I had to travel to Gujarat for the shoot. But since my dad is the DOP of the show I gave him a call and he asked me to go for the look test. And after that everything happened suddenly.

What challenges did you face when you accepted the role?
I was really excited when I bagged the show and I was even more excited when I came to know that I had to do sword fight and horse riding. The first time I did the stunts, I was so excited that I put my full energy in the scene and the next day I felt the bad intense pain in my hand. Another challenge is the slang with which we are speaking in the show. It is pure Hindi and all the words have to be carefully used and pronounced.

You portray the title role in the show. Were you nervous before accepting it?
Frankly speaking I was not really aware that I was playing the title role in the show because I thought the name of the show was Somnath Ki Yatra and I am playing Shobha in it. But when I came to know the show's name is Shobha Somnath Ki, I was on the ninth cloud. Since the release of Kumkum and Kkusum, I wanted to do a title role. Today I can say that dreams indeed come true.

How is the experience of working with Siddhart Tewary and his Swastik Pictures?
I have met Siddhath Sir only twice but the production house is really good to work with.

How is it shooting in Vapi?
It is really hot here and I am very badly tanned. I can see people around me wearing caps and shades which I cannot wear. We have a calm environment here as we are shooting on the outskirts and the crowd consists of village people.

Your father (Tony Rode) is also working on the same project. How was his reaction when you gave him the news?
He was very happy for me when I said that I got the call from Swastik, but I did not tell him that I was finalized in the show. Actually I wanted to give him a surprise by going to Gujarat, but I knew it was not possible because the unit people had already informed him. He was really happy that I took up the show.

Does he give you tips as he has been associated with a historic show like Pritviraj Chauhan earlier?
Not really, he was really happy that I was doing the show. But we were both nervous because he was filming me and I was giving the shot in front of him.

Is there anything that you learnt particularly for the role?
Not really because I did not get much time to prepare for the role. I had to leave on the same day when I started my sword fighting classes. I just did it for one day and the next moment I left for the show. I am learning the rest of the stunts and related stuff on the sets itself.

The show has been shifted to weekends from daily. How would you take that decision?
I really do not know, because frankly speaking the TRPs of the show have been similar to what they were earlier. But at the same time, technically, there are a lot of advantages because there is some more time for them to prepare.

The TRPs of the show have not really been satisfying. Are you worried about the show's future considering the trend in television now?
If I had kept that in mind, then I would not have taken the show. What is important to me is the character. I am really happy that I got a chance to explore myself as an actor being the lead for the second time.The most important phase in the show has started after the leap.

What can we expect in the show further?
You can see a lot of sword fights and horse riding in the show. I do not know when Shobha will return to her kingdom, but I guess it will happen soon.

What is the one trait in Shobha that inspired you the most?
Shobha is a very strong headed girl who does not get emotional easily. But I am very emotional and get upset soon.

This is your first show with Zee TV. How is the experience?
I am having a nice time though I have not interacted with many people from the channel. It is really a big channel. I remember when Yeh Ishq Haaye was going off air, Raunaq (Raunaq Ahuja) used to tell me that I would do a Zee TV show next and today I am. I am surprised.

Any message to for fans?
Please watch the show and give me love.

7 years ago i so wanted u nd Raunaq Ahuja to be together in real life...bt he is supposed to b seeing someone else :(... u two lokk gr8 together... m glad u two r still in touch... keep rocking Srishty Rode!

+ 5
9 years ago i DIDN'T LIKE HER AS MANJARI BUT SHE IS DOING VERY GOOD AS SOBHA... DS IS A GR8 SHOW.. N VERY NICE INTERVIEW

+ 4
9 years ago you r looking so beautiful as rajkumari sobha. and you and bhimdev has great chemistry. love you manjari

9 years ago ALL THE BEST Srishty Rode. U r amazing as manjari. Hope u get a great success!!!!!!!!

9 years ago YOUNG SHOBHA DID NOT HAVE A CROOKED SMILE, CASTING ERROR??
Shobha Somnath Ki WAS a brilliant daily show with very good trp's but now it has been been reduced to weekend only..This was predicted by so many I.F. readers when it was announced that Srishty Rode will be playing the older Shobha but the production house did not take any notice of I.F. readers..
NEPOTISM IS NOT DEAD!.

+ 2
9 years ago I'm happy for Srishty as she's enjoying her new show.
I used to watch Yeh Ishq Haayee and I felt bad that it went off really very fast. I wished for more Manjari&Akshay scenes even after working in Mumbai.