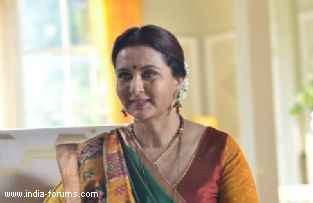 Actress Poonam Dhillon, who plays an illiterate person in her new TV show, says education is not limited to a certain age or class and describes it as a daily growth that helps one become a complete person.

Her show is titled 'Ek Nayi Pehchaan' and it shows how she learns to read and write from her daughter-in-law.

"Education is a daily growth. It's not about the degrees but about the kind of person it makes one. I feel it makes a human being complete," Poonam told in a telephonic interview.

"It makes you a more interesting person and it makes you deal with people in a better way.

"For me, education is very important. It opens up vistas of life and makes it easy for you to deal with it, because if you learn from other people's experiences, it enhances your life," she added.

The actress, who has been part of movies like 'Sawaal', 'Teri Meherbaniyan' and 'John Jani Janardhan', has returned to the small screen after four years. She was last seen in the third season of 'Bigg Boss' and was declared the second runners-up.

Earlier she did TV show 'Kitty Party', which had a successful run of approximately 500 episodes.

Poonam also believes that age has nothing to do with education or learning.

She said that she saw her mother studying throughout her childhood and feels that every family should support their daughters and daughters-in-law in completing their education.

"My mother got married at a very young age, but she did her B.A., B. Ed and M.A. after marriage. Parents or in-laws have to realize that they should give equal importance to their sons and their daughters. Both of them should be independent."

The show not just covers the issue of education and literacy but also brings the relationship of a daughter-in-law and mother-in-law in good light.

The actress feels that if a girl is unable to complete her education before marriage, she should do it afterwards.

"There is no age to learn. I think in-laws should be supportive and help her do that," Poonam said.

She strongly feels that films and TV shows can bring a change in society as people start relating to the characters and empathize with them.

"I definitely feel that films and TV shows can bring about social change. It becomes a topic of discussion in the family and people relate to it. Even the older generation are able to understand things when they see it on TV and identify with it," said the 'Noorie' actress.

"A lot of people are able to empathize with the characters. They can also distinguish between good and bad," she added.

7 years ago Ur doin a great job and personally believe that nobody could have done a better job!

+ 3
7 years ago I am loving Poonam as Sharda so much in Ek Nayi Pehchan she is the perfect fit for the role! I think what really works is that she believes in what is being shown on the show in real life so it makes it all the more real and convincing! So proud and happy she values women and education a lot! Keep going Poonamji you are doing a fabulous job!

+ 2
7 years ago Poonam Ji is doing a fabulous job in the show Ek Nayi Pehchan! With whatever she has said, I completely agree to it. Great going Poonam Ji.