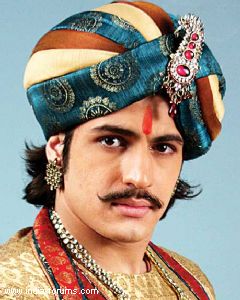 Small screen actor Rajat Tokas, who plays the male lead in 'Jodha Akbar', says he is soft spoken in real life but did not face any problem playing the 'authoritative' character.

"Akbar was very authoritative and bold and in reality, I am very soft spoken. But Akbar had the help of his ministers and even I get that help during the shoot when I am playing Akbar's charater and that makes it easy for me to play the character," Rajat told reporters at the launch of 'Jodha Akbar' e-book and mobile game at Karjat.

The 22-year was asked what attracts him to the role of the Mughal emperor.

To that, he said: "Akbar was well aware of anything and everything. He had everything - money, fame and power.

"The best part about him was that he knew how to use the power. He believed in planning and always made plans in advance. I like that about him."

Unfortunately, Rajat has not tried his hands at the game as yet and won't be able to play it anytime soon either.

"I haven't played the game yet and I have an iPhone so I won't be able to play it since iOS doesn't have the mobile game. But I will try to play on my friends' Android phones. Once it's available on iOS, I will download it," he said.

Usually actors are dressed as their characters at press conferences, but Rajat made an exception due to an injury that he suffered a few days ago.

"I got an injury on my foot. I got it treated, but I was still facing a lot of problems. I couldn't wear my jooti because it was made of leather and it hurted me.

"I had to go to Delhi to get it treated properly. It's not healed properly, and that's why I chose to wear cushioned sandals," Rajat said.

aanchal_c 6 years ago rajat tokas u r fab as akbar,if only cv's would maintain ur character.

aravapalli 6 years ago rajat rocks., his performance was amazing

Amanda Seyfried Announces The Birth of Second Baby
53 minutes ago

NCB Dismisses Rhea's Claim of 'No Jurisdiction in Drugs ...
54 minutes ago