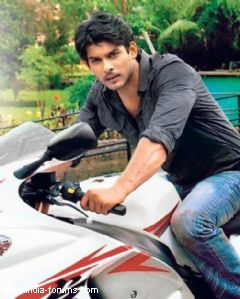 TV actor Siddharth Shukla says that a role in popular show "Balika Vadhu", which recently clocked 1,500 episodes, is the best thing that has happened to him.

"Balika Vadhu" went on air in 2008 with the launch of channel Colors.

Siddharth plays Shivraj Shekhar aka Shiv in the show, which stars Toral Rasputra as the female lead.

The handsome actor salutes the show's writers for managing to keep the audience hooked to it for so long.

"It feels good that our show has completed 1500 episodes. Very few shows reach this milestone. Usually, today when there are so many channels and shows, most of them don't continue for very long," Siddharth said at a celebration party of the show Saturday.

"But if our show has been going on for so long, there is definitely something good in it. I feel good and blessed to be a part of a show that has completed 1500 episodes and is still going strong. Hats off to my writers," he added.

The party was attended by the entire present cast of the show. Actress Neha Marda, who played Gehna till two years back, was also present.

6 years ago Siddharth Shukla, as Shivraj Shekhar you will remain remembered worldwide.

7 years ago Hi, Siddharth Shukla and Toral Rasputra, a very good morning to both of you. . Both of you are doing good job as Ansh.

7 years ago Hi' Siddharth Shukla and Toral Rasputra' Good evening. Love both of you as Ansh.

7 years ago Hi, Siddharth Shukla and Toral Rasputra. Both of you as Ansh. Keep rocking Ansh..

7 years ago Hi, Siddharth Shukla and Toral Rasputra, good morning. Both of you are doing good job as Ansh.

7 years ago Dear Siddharth Shukla, the best thing that have happened to you is Pratyusha Banerjee...you and Pratyusha together have the same chemistry, same charm and same charisma as the legendary Hollywood couple Richard Burton & Elizabeth Taylor...