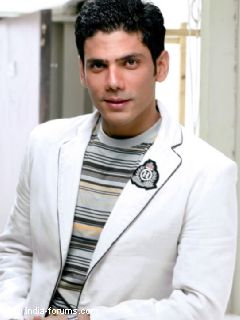 A lot of tension is brewing up between Kittu and Anand in DJ's popular show Ek Nanad Ki Khushiyon Ki Chaabi...Meri Bhabhi on Star Plus. Good looking and talented actor Vipul Gupta who plays Anand in the show, is quite happy playing different shades of Anand in the show. TellyBuzz spoke to Vipul to know more about his character and about his point of view on the current relationship status between Kittu (Esha Kansara) and Anand.

According to the ongoing tracks of the show, Kittu and Anand are not on talking terms with each other. So when probed Vipul about the same he tells us, "They have never prioritized their relationship. Parents and his sister (Kanchi Kaul) has always been a priority for Anand. He is a simple guy who supports what is right but he never prioritized his marriage. On the other hand, Kittu always prioritized the happiness of her sister in law but she never listens to her husband nor took out some time for him. So, they both didn't prioritize their relationship with each other. It's very real in a today's time. A husband wife relationship is mostly portrayed like Ram Sita in television but these problems do come in real life especially when living in a joint family. They both are right as well as wrong in their own ways. This is the high point of the show which is going right now that they both are wrong even being right because if they didn't prioritize their relationship as husband and wife, they tend to fail and might face a situation like what Kittu and Anand are facing right now."

Vipul is quite happy playing the character of Anand which he feels is very fulfilling as an actor and he adds, "The show is doing quite well even if it airs in it's toughest slot as the other popular shows like Balika Vadhu, Jodha Akbar and Devon Ke Dev. Mahadev etc. also air on the same slot which are doing well and are quite successful. So, it was a tough competition for us but we have picked up and it feels good. I am getting an amazing response from UK too. I have done shows like India Calling in which I played a brat and I played some other characters too in some other shows but I am getting acclaimed as an actor through this show. I am getting lots of love from the people. I have got to play different shades through this character like I have laughed, I have cried, I have done action which is very fulfilling as an actor."

rajukismet 6 years ago Love you Vipul Gupta.. you are the best actor that exists in indian television

Mehek25 6 years ago Vipul is doing a very good job as Anand in this show.

purvi_tvstarlet 6 years ago VIPUL is getting hotter day by day . i want to kiss vipul

Saanjh5 6 years ago Love you Vipul Gupta.. you are the best actor that exists in indian television... love you