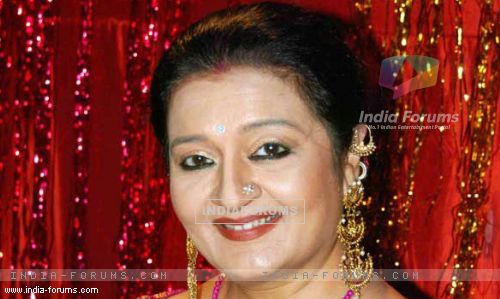 Though Apara has been portraying stereotype of roles in the shows, the viewers have always liked her versatile acting skills and she has set an example for many women through her portrayals.

We got in touch with her to know about her journey in the industry, her love for acting, about the character...

Talking about the modern concept of Jamai Raja Apara says "Society has to change and so do concepts we can't show something that is 50 years old. We need to bring the change and its people like us who can bring the change. Our society can only change when all of us will change our mentality. I will be happy if this show and its modern concept contributes to even one percent change in people's mentality."

Do you think this show will be a trend setter for audience? "Let's hope so, till now I have done all trend setter shows like Kyunki Saas Bhi Kabhi Bahu Thi, Ek Mahal Ho Sapno Ka, Sajan Re Jhoot Mat Bolo and even Tu Mere Agal Bagal Hai is different. So I just hope this turns out the same way, " avers Apara.

When asked her what appeals her more Theatre, Television or Films? She replies, "Theater is my priority, television is equally good and if I get to do films I would do. Films do not matter to me because today even film stars are doing shows."

Apara Mehta is well known for her roles in Gujarati theatre sharing about her love for Gujarati theatre she says, "Gujarati theatre is very advanced and we make a lot of money. As Gujaratis we try to bring art and economy together. I make it a point that I do tell people that I don't do theatre for satisfaction and money, I do it for happiness. In Mumbai itself I do 36 shows in a month."

You will be doing two shows together, how do you manage? "I work for 20 hours with no offs and with this I manage to look after my family also, being a women I have to be multi tasking. My work gives me satisfaction and pleasure and I never feel tired working in this industry."

Talking about her character Apara says, "I am playing the role of Nani who is fun loving and I can easily relate to the character because in real life I am a very fun loving person."

So how is Apara's bonding with co-stars? She says,  "We all are friends and they all love me a lot."

Sharing about her love for acting she says, "Acting is my identity. If someone comes and asks me the question that if you would have not been an actor then what would you have been? I never have any answer for this because I think nothing gives me pleasure but acting. Though I have learned dancing and singing but acting gives me an overall satisfaction. It has given me name, fame and money; this career has taken me till Prime Minister's house."

Lastly Apara concludes saying, "I want to say to all my fans to educate their daughters so that she can be an independent and she doesn't become the target of violence."

Well said Apara , we wish you good luck for the new show.

+ 3
6 years ago Apara Mehtaji is super-talented actress. Welcome back Aparaji. You have lived every character you have played so far and you'll breathe life in your character in this new show as well. All the very best for the new show.

6 years ago Apara is a very good actress. But, I completely differ when it comes to her opinion about Kyunki Saas bhi Kabhi Bahu Thi. Someone please explain in what sense was KSBKBT a trend setting shows. If she is talking about a bad and negative trend of showing kitchen politics, yes it takes away the cake.

9 years ago eugh, no offence but this dress doesn't look good on either of them. This dress would suit a petite and slim girl, not that amisha or bipasha are fat or anything but they dont have the right figure to carry a dress like this. But wearing this dress to IIFA in the first place, seriously?????.

9 years ago Not going to lie, I don't like the dress but I think Bipasha pulls it off better :)

+ 6
9 years ago I could have sworn her name was spelled as 'Amisha' = | Oh well. What's happened to her? She used to be a pretty innocent looking girl. I can never forget her role in Gadar; she looked absolutely beautiful.

Bipasha looks pretty damn big as well. But I guess the colour of her dress is more subtle and relaxed - toned if you must say.

Basically both look horrendous. I think the dress would better suit someone extremely slim and petite. But then again the dress is quite ugly in itself.

I choose Sharukh Khan - even though his not even in the photo! LOL ;)

9 years ago i think both dresses r ok
but actresses are reallly goood
:)

+ 2
9 years ago Amisha's color is better. i think i like hers more