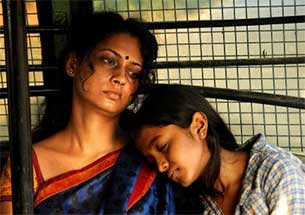 PVR Pictures, which has distributed Bollywood films such as "Taare Zameen Par" and "Ghajini" in the past, will for the first time release a Tamil film - "Vidiyum Munn", slated to hit the screens Nov 29.

The project is an experimental thriller.

"Someone from PVR Pictures contacted me and expressed interest to discuss about the film after seeing the trailer. Apparently, they were impressed with the trailer and set up a meeting with the core team. I screened another trailer for them and they instantly liked it and agreed to release the film," the film's director Balaji K. Kumar told IANS.

"I think it was the strength of the trailer that eventually got them take notice of the film," he added.

The story of the film, which is about child trafficking, revolves around four men, three reasons, two women and one day.

"Vidiyum Munn" was originally pitched as a Hollywood script, but it was later adapted to Tamil by assistant directors Abraham Prabhu and Mithran Sarvanan, who helped pen the Tamil dialogues.