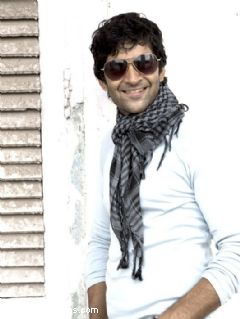 Actor Purab Kohli, who will be seen as a contestant on Jhalak Dikhhlaa Jaa Season 7, chose his grand-uncle and late actor-filmmaker Dev Anand's hit song Hai apna dil to awara to dance at the premiere of the reality dance show.

Accompanied by his choreographer Mohena, Purab also grooved to the title track of his own film Rock On!!.

"It was an amazing and comforting feeling to be introduced on a Dev Saab song as a contestant in this season of 'Jhalak...'. Salman who choreographed the opening act thought it was a great way to introduce me on this song," Purab said in a statement.

"I was a bit nervous since this is a new avtaar as a dancer but once the track kicked in so did the energy," he added.

The episode will be aired on Saturday on channel Colors.

Charming-Arjun 9 years ago Looking forward for the movie..
Luv U Salman .U rocks.

Kai. 9 years ago i know there is going nothing new / different in this film but i would prefer to watch this 'masala bollywood' films than wannabe hollywood copies which are all about sex!!

rpuran 9 years ago Same kinda larger than life roles.. Bored with them, sallu!!!

chahat4u 9 years ago great interview. Love you a lot salman...waiting for ur films...be it niche or heroe centric, formula films. We kw u cn act in both very well. :)

Lady_Impala 9 years ago me waitinng for this movie... cant wait... it is relesing ere tomorrow but will watvh on saturday... damn after along i will be watching hindi movie...hope it doesnt disppoint...

Wings-of-Fire 9 years ago ya. he could say that. why would not he become bored of niche films? after all he cant act in them. and films he's doing now, has got everything- dance,romance,masti and action, they just lack one tiny element- purpose!
i'm so sick of him.

Problem.C 9 years ago good luck all the best and best wishes to u

Pirated_Fun 9 years ago 'I AM REALLY fed up of watching you in Films... U proved ur so called talent in all ur film