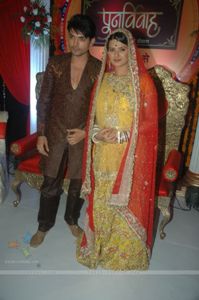 It must truly have been an embarrassing moment when the team of Zee TV's upcoming show Punar Vivah starring Gurmeet Choudhary and Kratika Sengar, was caught without ticket on one of the local train stations in Mumbai. Sounds interesting! Read on.

A source revealing on the incident quips, "Recently, the cast of Punar Vivah had an outdoor shoot at Vadsal and a few sequences were also being shot in a running train at Mumbai Central. Though the production had taken a permission from the Railways to allow shoot for a day at these particular stations, the cast was caught without a ticket."

"Actors such as Chetan Pandit, Samragyi Nema,Zahida Perveen, Amit Singh Thakur and the director of the show Hemant were about to get down at Mumbai Central, but due to the rush in the train they couldn't and got down at Andheri Station finally. But it seems the day was unfortunate, as the cast was caught by the T.C. as they were found travelling without ticket," adds the source.

"Only after the director asked the T.C. to have a word with the production team who had already taken the permission to shoot, the cast was let go.".

All our efforts to reach Chetan Pandit were in vain while Samragyi Nema confirmed the incident, "Yes that was the funniest incident,t I must say. We all were caught without ticket. The ticket checker also warned us that next time we should be with a ticket, whatsoever might be the reason."

Well, we too suggest that the team follow rules the next time!

9 years ago GURMEET you are the best
keep rocking and smiling GC...
love you loads

conch 9 years ago Just give your best Guru and Kratika. I'm sure you'll be liked by all.

+ 4
9 years ago Guru, Kratika, Punar Vivah team once again wish you all ALL THE BEST. May you all enjoy working together and get all the recognition, rewards for your hard work and talent. Bless you

vivify 9 years ago 6 days left in all for the show to start, till then enjoy your shoot Guru Kratika and entire team