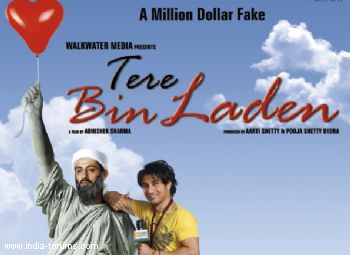 The time is ripe for small budget movies, but, despite that, the money bags are not willing to loosen their purse strings, says Pradhuman Singh, who faked Osama bin Laden in the critically and commercially successful "Tere Bin Laden".

"Although these are promising times for small budget films, unfortunately companies are still reluctant to put in money if there is no big star cast, despite good content. There is still a massive struggle for non-star cast, small budget films," Pradhuman told IANS on the phone.

His next project is "Life Ki Toh Lag Gayi".

Apart from acting, he has also written the screenplay for a film but refuses to reveal the details.

"I have written an entire screenplay, but I can't really talk about it. I am also co-writing another screenplay. As far as weilding the megaphone is concerned, that can wait. I have just started my career, I want to get ample amount of experience to be able to actually get down to directing a film," he said.

A graduate in hotel management, Pradhuman did theatre along with "Tere Bin Laden" director Abhishek Sharma.

He admits there is cut-throat competition in the film industry but says passion and hard work help in achieving goals.

"You have to be passionate towards your work. There is cut-throat competition everywhere. One has to put his or her priority right and work hard in this industry."

However, his acting career has yet to take off in a big way. He feels playing Osama lookalike in "Tere Bin Laden" seems to have put him in an identity crisis. While many would have thought that his acting capabilities would have won him new roles, the actor begs to differ.

"Unfortunately I didn't get a lot of films after playing a fake Osama on screen. Whatever roles I was getting, I didn't like them. Some of them were similar to the one I played in 'Tere Bin Laden'. I didn't want to get stereotyped so early in my career," said the young actor, who is from the capital.

"Some roles which were on my wishlist didn't work out. As an actor, I have to be very careful of what people would think about me. I wouldn't want my graph to go down. I know it will take time to shape up and I am looking forward to it," he added.

Many people still don't know who the real Pradhuman Singh is, thanks to his hidden identity during and after the film's release. Although Pradhuman admits he is enjoying it, it has somewhere affected him.

"A lot of people don't know who the real me is. Many directors don't know what the real Pradhuman Singh looks like. Since my identity was not revealed, I believe many directors couldn't fit me in any other image," said the actor, who will now be seen in "Life Ki Toh Lag Gayi". The film releases April 20.

Zee TV's Apna Time Bhi Aayega : A Story of Defying your Destiny and ...

Kangana Ranaut tried to mock Deepika, Sara and Shraddha for ...
36 minutes ago