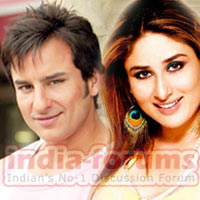 Featured Video
ditya Chopra is so hush-hush about his new movie "Tashan" that he has even ordered the stars of his film to limit their public appearances. Aditya reportedly wants them to stun the audience with their new looks. It's said that Saif Ali Khan, who is always game to experimenting, will sport a moustache this time. Anil Kapoor will don a handlebar moustache, while Akshay kumar will be seen in short hair. Actress Kareena is the busiest shedding kilos to fit into skimpy sexy costumes.

Now, the debatable fact is whether all the stars will follow instructions given by the producer. Saif has already broken free and appeared in a commercial in his new look with sister Soha Ali Khan. Now we need to wait and watch when Akki Baby puts his foot down. -(SAMPURN)