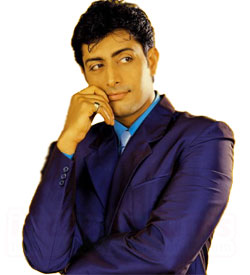 Priyanshu Chatterjee has his eyes set on glory and fame with his comeback film in Bollywood, 'Bhootnath'. The actor is thrilled for the fact that he got the opportunity to share screen space with greats like Amitabh Bachchan, Shahrukh Khan and Juhi Chawla.

Even though viewers are eager to see the 'Bhootnath' Big B in action, Priyanshu will surely get his dues in the film, taking into account that the film is from the reputed banner of BR Films.

Well, the actor who had gone into the oblivion after his first few releases 'Tum Bin', 'Dil Ka Rishta', managed to secure some lost ground with 'Pinjar' and 'Julie'; but now, if things fall in place for Priyanshu in 'Bhootnath', the actor can surely get a breather in the industry!

So can we say, welcome back to Bollywood, Priyanshu?