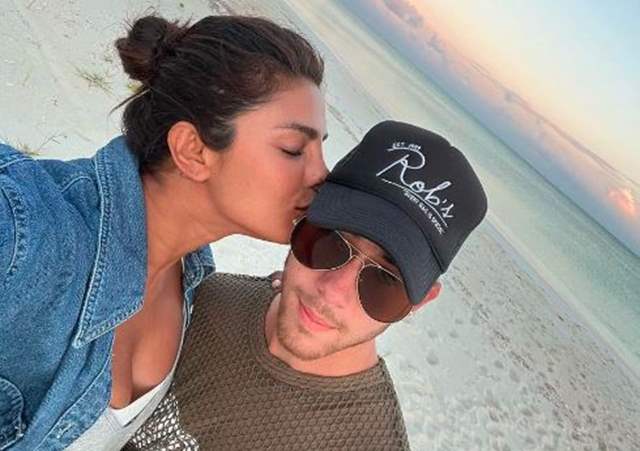 With constant work and multiple projects on their plate and a little one to take care of as well, actors and power couple Priyanka Chopra and Nick Jonas needed some time off indeed. And it seemed the perfect time to get away and head for romantic vacation.

The couple did so and jetted off to a tropical vacation at the beaches in Turks and Caicos Islands. And needless to say, they are having the time of their life. While, the fans might wonder how are they living it up there, Chopra made sure to share not just a few pics bit an array of images and a couple of videos as well from this romantic beach vacay.

She dumped them all on her Instagram captioning the lips, heart and namaste emoji and tagged hubby Nick Jonas. Her caption also saw the hashtag #islandgirl and #Photodump-

Apart from the first image where Chopra is seen planting a kiss on hubby Nick Jonas' cheek, another couple of them show the in-love couple is shown to be posing for the camera with their vacay looks being spot on. As soon as she shared the pictures and the videos, comments poured in from all sides. While one fan called the couple ‘Adorable’, others dropped a heart-eyed emoticon on the post. Chopra's co-star and friend, Ranveer Singh took to the comment section to drop an evil eye and red heart emoji on the lovely post.

As one would remember, Chopra and Jonas became parents earlier this year after they welcomed a baby girl via surrogacy and named their daughter, Malti Marie.

On the workfront, Chopra will be seen in the forthcoming film, Jee Le Zaraa where she will co-star Katrina Kaif and Alia Bhatt in lead roles. The actor will also be seen Citadel in her kitty.