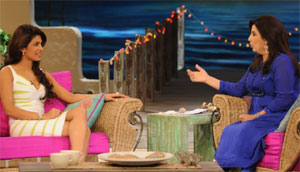 Star Plus' Tere Mere Beach Mein is a chat show with a refreshing difference. Host Farah Khan who is buddies with most of Bollywood's bigwigs could be the reason for the celebs to be so wonderfully comfy in the show. This week, the lady with the magical feet hosts two very amazing guests- Bollywood actress Priyanka Chopra and Olympic boxing champion, Vijender Singh.

Apparently, the theme of the day is 'Chhote Shehar, Bade Sapne'( Small towns, Big Dreams) .  And we all know both Priyanka and Vijender have come a long way from Bareilly and Bhiwani respectively.  Both the guests speak candidly about their humble beginnings and the enormous struggle that it took for them to reach where they are presently.

It was during one such heart pour that Priyanka cracked that brittle composure of hers and let her eyelashes let go of the tears. Moreover, she broke down not just once but several times during the show. It was definitely a never- seen- before side of Priyanka.

So what makes her breakdown? To find out catch Tere Mere Beach Mein on saturday, August 29 at 9 pm, on STAR Plus.
Featured Video 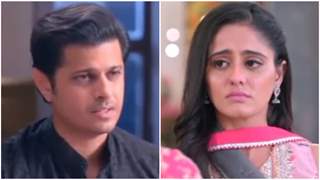 i luv priyanka chopra..one of the best actresses in bollywood:)

13 years ago this will be interesting to see.. i ve never seen priyanka cry.. except in TV but not in real life.. i love priyanka chopra.. she's my fav..

+ 5
13 years ago I dont want to see the diplomatic answers and crocodile tears. Most celebs make a mockery of emotions by over reacting to miniscule things, hope its NOT one of these and it holds up to the entertainment quotient of Salman's epi.

13 years ago hahahah gosh this celebs dont get other places to cry onlly drama n drama .. i guess farah worte another story on ppl to cry.. i guess as karan's show was with coffee this show should be with tissue papers .. snob snob ..hehehe.. bogus!! give ppl a balti ...