Well, Jay Bhanushali and Panchi Bora whose onscreen pairing has been appreciated by viewers have missed the bus yet again, as the latter will now not be part of Star Plus' Kis Desh, as reported earlier by Telly Buzz. 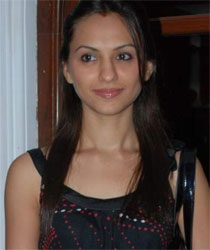 Featured Video
According to our source, "All was decided with Panchi, and she was set to start shoot from tomorrow. But things could not be worked out as she got to know that she had to travel out of country for one of her commitments".

Confirming her unavailability, a disappointed Panchi told Telly Buzz, "I missed a golden opportunity of getting back to the best production house, Balaji. Only after I agreed to play the role in Kis Desh did I get to know that one of my ad shoots got advanced. I have to travel abroad tomorrow for that particular shoot; so could not manage my dates for Kis Desh".

Our source further informs us that, "In place of Panchi, the production house has now roped in Priya Bhatija Shah to play Jay Bhanushali's fiance in the show".

We called up Priya, who had just then reached the sets of Kis Desh. "I am doing the role of Soni in the show. I don't know much about my character as I will be getting my narration only now".

All we can say is that one person's loss is another's gain!!

13 years ago i love panchi shabbir together but i want to see again . i miss her ..

+ 2
13 years ago Jay and prachi look the great 2 gather.
nooooooooooo

13 years ago jay and prachi look the great 2 gather.
nooooooooooo

13 years ago I want only shabbir and panchi.
Thanx

+ 3
13 years ago well we all knw jay and panchi rock together bt if panchi cant make it ..thn we get to see jay wth another actress n ths priya :) n lke all hs other co stars jay will look awesome wth priya also..actually cant wait to see them together onscreen..