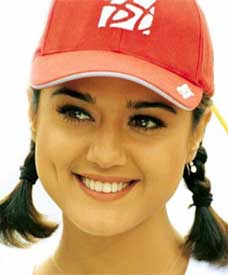 Preity Zinta, 'dimple girl' of Bollywood, was stuck in Delhi's airport toilet for more than ten minutes! Luckily though, she managed to climb up and jumb over the toilet stall's wall. Meanwhile, folks outside repeatedly called out her name.

Preity tweeted in her Twitter account after the incident, that she thought she was going todie because of her claustrophobia [fear of closed spaces]. Zinta had no other option apart from jumping over the wall, as a result.

The actress also quipped that being a tomboy during her youth came to her rescue!

Zinta mentions in her tweet that the public was cheering her on during her moment of glory. Now, whether the folks calling out for Preity were commending her courage or questioning her safety, only Zinta and her spectators can tell you!

However, the Bollywood actress did tell us that she pulled a muscle in her arm, yet provided entertainment to everyone at the same time!