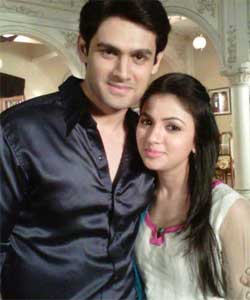 Zee TV's Preet Se Bandhi Ye Dori Ram Milaayi Jodi has finally got a couple from within the show.Preet Kaur Madhan a.k.a Sweety is getting married to her on-screen husband.

According to our source, "Preet is getting married to Vishal Nayak. The two have been dating each other since a year and have finally decided to tie the knot on 5th February in Mumbai."

We contacted Preet who confirmed the news, "Yes,Vishal and I are getting married. We met each other on the set last September and in October he proposed to me. Initially, we just wanted to go with the flow, but now after a year, we've decided to settle down. Most of the functions will be in Mumbai itself but we'll hold a reception in Delhi, since I belong to the place. When I met Vishal for the first time I hated him because of his over- friendly and frank nature. But  later on, it started impressing me."

We wish the couple a lifetime of togetherness...

+ 2
9 years ago Awww...they truly make a sweet couple!CongratsPreet and Vishal! All the best for the future.
And keep up the great roles of Sweety and Parmeet.

reena71 9 years ago Congratulations. A very happy married life to both of them

+ 8
9 years ago Never knew they were a couple, all the best to them!

9 years ago A very happy married life to both of them...you are best and sweety andp armeet.

thisistas 9 years ago omg thats sooo cute! i can't believe they're already getting married! i wish the both the best marital life ever(:

+ 2
9 years ago awww how cute - i love them onscreen together and better yet ofscreen. Cv's should give these two a show on their own they have awesome chemistry.

9 years ago congratz! u two really look good together! i love whn i see on screen couple getting married :)