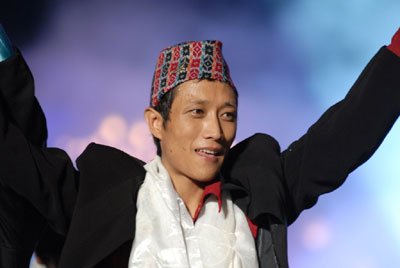 Prashant Tamang is The Bharat Ki Shaan, The Indian Idol 3! Hailing from Darjeeling, Prashant has now become the Boy Next door, as he has managed to walk into the hearts of the people of India, with his lively songs.  After months of hard work, perseverance and dedication, the 24 year old Prashant Tamang  reached to the winning title in grand style. From being a part of the police force in Kolkata, to being the youth icon of the country, Prashant surely has come a long way. With a total of 7 crore votes that came in, Prashant Tamag got away with the maximim votes. "I would like to thank the Indian Idol Platform, the judges, my mother and the Kolkatta police force" said the winner. Prashant is now a proud owner to the Maruti S4, along with a one crore contract with Sony, and much more.

The Grand finale was held in Delhi on the 23rd of September. The evening dazzled with the top 12 Indian Idol finalists along with the most popular eliminated contestant - Suhit, the three esteemed judges - Annu Malek, Javed Akhtar, Udit Narayan and Alisha, accompanied by celebrities like John Abraham, Mika Singh and Sukhwinder Singh who put up a fabulous performance with the female Indian Idol finalists. The winners of Indian Idol one and two - Abhijeet Sawant and Sandeep Acharya took to the stage once again, remembering their wonderful past. Mini Mathur and Husein cheered the crowd and the finalists, as they put up a great show.


The runner up of third season on Indian Idol was the young heart throb of millions - Amit Paul.
Featured Video 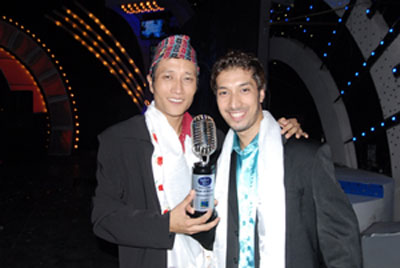 Amit not only managed to make it to the top 2, with the wild card entry, but was also chosen as the Brand Ambassador of Meghalaya during his journey in Indian Idol. Along with Prashant Tamag, Amit Paul too was gifted a brand new Maruti S4 car, for his brilliant performance. Both the contestants were gifted a Sony Erricson mobile phone, apart from the love and fame that they recieved over the last three months from people all over the world.


We wish the lucky winner - Prashant Tamang a hearty congratulations, and wish Amit the very best for future.

smiley_maha 14 years ago Congrats Prashant n all the best Amit!

thanku for the article

+ 3
14 years ago im shocked.. i wanted prashant to win but i thought that he didnt have a chance of winning.

but he did.. yay. though i wished it was a girl this yr. but oh well

14 years ago Prashant first of all congrats for becoming Indian Idol but it doesn't matter i still believe you gonna sing only for nepalissss & for darjling people whereas Amit will sing for all of us. Amit will be the best singer in the bollywood industry for sure :-)

anjalijai 14 years ago iam happy for prashant but amit is a far much better singer. May be the indian audiences related to him more. I don't know on what basis they choose him as the indian idol he didn't improve his singing till the last few weeks of the finale..

14 years ago i dont get it! Most of u ppl do not like prashant then who the hell was it voting for him!!!!!! I REALLY preferred Amit Paul over him....he has tht nepali accent to w/e he sings n i dont like prashant!!!