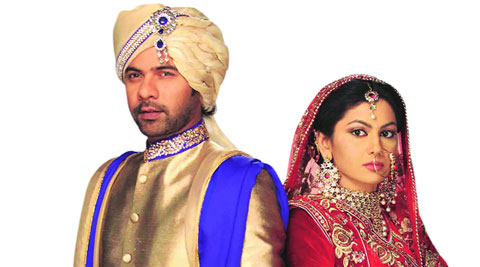 Zee TV's show Kumkum Bhagya under the banner of Balaji Telefilms is garnering attention of audience with the kind of twist and drama the makers are presenting in for the viewers.
As seen till now, Bulbul and Purab's marriage preparations are going on in full swing. Whereas on the on the other side, Tanu and Aaliya are up to something or the other to harm Bulbul.
Our source says, "Tanu (Leena Jumani) and Aaliya (Shikha Singh) hatch a plan to throw acid on Bulbul's (Mrunal Thakur) face before her engagement.Their plan fails as the corporator catches the man who was about to throw acid on Bulbul's face. Later when he comes to know that it was Aaliya and Tanu's plans, he tells them that he will file a complain against them."
"They will plead to corporator for not lodging a complaint against them instead they all agree to kidnap Bulbul on her engagement as the cooperator likes her. So on her engagement they will try kidnapping Bulbul but her sister Pragya will be kidnapped," adds our source.
How will Abhi (Shabbir Ahluwalia) react to this?
To know more keep reading the above space.
Phalguni Sharma

6 years ago Arjit Taneja and Mrunal Thakur rocks!!!! Plz get Purab and Bulbul married soon ..enough of this nonsense!! We fans have waited alot.rabul needs to be together in kkb!!! And plz can we get more Rabul scenes...

6 years ago end this crap.nothing left to see in this stupid never ending saga

+ 3
6 years ago Exited to see this track... Hope Abhi strts developing feeling for Pragya in dis track & finds out who is behind dis...

6 years ago The actors, Sriti, Shabbir, Mrunal, Shikha and Arijit are playing their parts with perfection and are enjoyable to watch on screen but what is with these tracks? Aaliya and Tanu should be locked up in jail with serious repercussions for the acid attack thingy not helping to kidnap Pragya.

+ 4
6 years ago Yippi!...I really hope its true...
Now abhi will get to know Pragya's value
Sriti Jha and Shabbir Ahluwalia ..

+ 4
6 years ago Hope this track makes Abhi realize the value of Pragya in his life ... Love Shabbir Ahluwalia & Sriti Jha

6 years ago Sriti Jha and Shabbir Ahluwalia our couple ! I hope this news is true !