Prachi Desai is one actress who has had different journeys in a short period of time. First was Bani, then came Jhalak Dikhla Jaa followed by Yeh Hai Jalwa and now her debut film, Rock On opposite Farhan Akhtar. Telly Buzz caught up with this self-confessed bubbly teenager for a chat on the same. 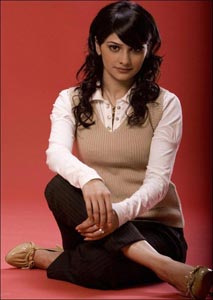 Featured Video
What is your role in Rock On?
I play a sophisticated south Mumbai girl who is stylish, but not wild. She is mostly seen in shirts and skirts and is quite mature in her outlook.

How was the experience of working with Farhan Akhtar?
Great, I remember watching Dil Chahta Hai,, when I was in school. I was nervous on the first day but soon things worked out. He is a real cool guy, cracking jokes every other minute. Although the director gave us a lot of space to do our own thing, Farhan never interfered with his call.

We have heard that you have sung in this movie as well?
Yes I have sung a part of a song. It was quite funny the way it happened. They called me to a recording studio and I went, thinking that they may want one more narration. But when they asked me to sing a few lines, my reaction was ‘Guys you must be joking’! But soon it dawned that they were dead serious. Hence I had no option but to croon, luckily I got through in the second attempt. At the end, I jokingly mentioned, you should have informed me in advance, I would have not had an ice cream.

Is Ekta going to promote the film through her shows?
Since the director Abhishek is Ekta's cousin and she is my friend as well, it would be good for the film, if it does happen. We will get lots of publicity as people do watch her shows. But that is between the producer and Ekta.

Explain the differences between Bani and your Rock On character?
Big time, Bani was much older while Sakshi is closer to my age. It was much easier to react to a situation as Bani would, but here it took time to get into the skin of the character.

What next?
I have signed one more film, Abbas Mastan's Life Partner with Tusshar. As for more stuff, I will wait for Rock On to release.

What type of roles would you be looking at?
I want to experiment with all kinds. But yes I will never be comfortable with very bold characters.

Very few stars succeed in transition to big screen…
Actually earlier even I had said the same thing. But may be what worked in my favor was that they approached me and not the other way around. If you start looking for work, you may end up choosing the wrong projects. And above all I thank my lucky stars for this.

How did you feel after quitting Kasamh Se?
It was a different experience, for a long time my life was scheduled to waking up to the EP's call and rushing to sets. So for few days, I would get up at 12 pm and watch the repeats at 12.30.

Your fans are angry at you for betraying Bani?
I have read such reports and wish to clarify. I was not comfortable playing a mother to a twenty year old. And plus the creatives had already done 2 five year leaps, hence they had no other alternative but to have a major generation leap to keep the story going. So the best option for me was to move out. And luckily just then, Rock On happened.

Your take on Gurdeep Kohli as new Bani..
She is a great actress. I have seen her playing Dr. Juhi in Sanjivani years ago.

Will you ever return to Kasamh Se?
No, for the time I will be free, I don't know how many more generation leaps the show would have already gone through.

What about other TV shows?
Hoping that I succeed in films, I will always remain connected to TV, doing some ad or anchoring realty shows. I will not be able to take part in them, as I will be quite busy.

Have you passed your first year exams?
No, as I could not give my exams in March due to Rock on. But I sure aim to complete my graduation anyhow. The atmosphere on the sets of Rock On was more like a college campus, thus making up for the absence of regular college.

14 years ago i miss her in the show..but gurdeep is doing well too nd its time to move on not stuck up to one show FOREVER...she is got fame nd she shd try other shows too..!!

14 years ago SOME ppl may feel 'betrayed' n wut not but ppl gotta learn to stop cryin wolf n move on man>>>>dammm its so annoyin when ppl whine specially when dey dunt care man>>>i gotta b lik one of da biggest fan & I DUNT feel betrayed prachi>>>a true fan dunt buhh understand dat n prachi I understand. lifez all bout changes n man im so glad u aint in shitty ks no mo. i wuz only watchin cuz u wuz dere now dunt wutch >>>>only cum on dis site 2 c if any newz on u>>> luv ur new look so mo hot n YOUNG ;)

Over the phone, Prachi assured an ex-IF member that was NOT going to quit Kasamh Se... and then she went around saying that she was taking a break from Kasamh Se and that she didn't want to be replaced!

But now she says that she had decided to quit because of the leaps!

I wish Prachi all the very best, but I think that it was highly unfair of her to mislead her loyal fans like that.

I totally understand the feelings of the fans who feel betrayed.

You seem to have made great decisions so far!

+ 2
14 years ago she's so pretty,and an amazing actor can't wait to see her movie.

+ 2
14 years ago gud luck with all that u do.cant wait to watch the movie..lol