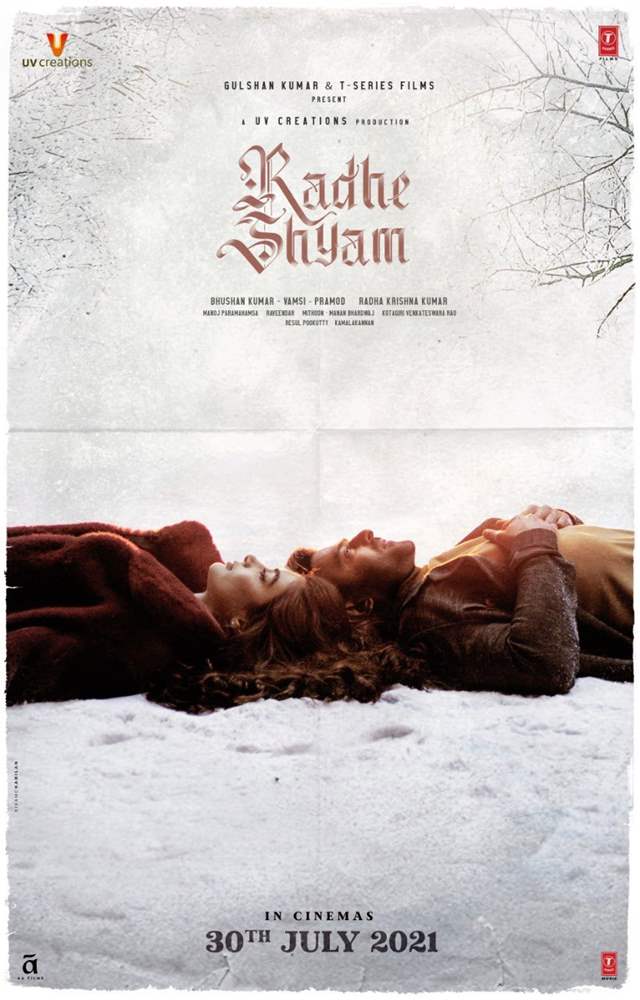 The makers of Radheshyam have unveiled the character poster of Prabhas for the film Radheshyam.

On the auspicious occasion of Maha Shivratri the makers of the film released the poster as a mark of respect to the epic love story of Shiv-Parvati.

Also, owing it to the intrigue and excitement that surrounds this film, makers decided to release this poster.

This love story will leap all bounds with the pairing of  Prabhas and Pooja Hegde.

In the poster, the duo is seen lying next to each other on the ground with faces in different directions with a snow-clad backdrop. This poster sets the mood so romantic and dreamy.

Prabhas took to his social media and shared the intense poster of the film and wishes all his fans on the occasion of Mahashivaratri.

The caption reads "On the auspicious occasion of Maha Shivratri, delighted to share new poster from #RadheShyam with you all."

The poster showcases the grandeur of the film and the massive scale at which it has been made. The backdrop is of Rome, the film was shot in picturesque locations of Italy and Rome. Recently, on Valentine's Day the makers had released glimpses of the film with motion posters and those were doing rounds among the audiences making 'Radheshyam' a talk of the town.

Touted to be a romantic-drama film, Radheshyam stars Pooja Hegde opposite Prabhas. The actor will be seen in a romantic role after a decade  and the poster is sure to add up to the excitement. Radheshyam is going to be a one of a kind film.

The film will hit the screens on July 30, 2021 and fans are losing calm as the wait it testing, they cannot wait to see the Pan-India star Prabhas romance the gorgeous actress, Pooja Hegde in the film. Radheshyam will be a multi-lingual film and is helmed by Radha Krishna Kumar, presented by Gulshan Kumar and T-Series. It is produced by UV Creations. The film features Prabhas and Pooja Hegde in lead roles.

Source reveals how Pooja Hegde is managing her stressful quarantine ...

2 months ago Hope RS has a good story...